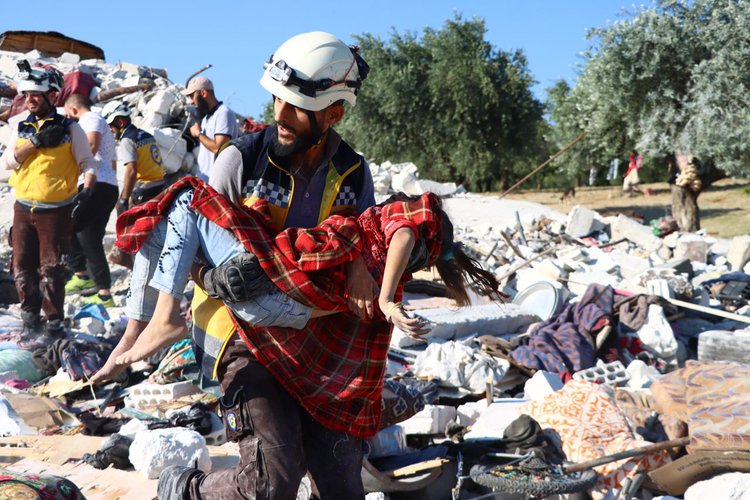 More than 12 thousand civilians including 4 thousand children documented by Syria Civil Defense have been victims of Russian aggression in Syria during the past seven years, as the international community keeps turning a blind eye on the continued atrocities.

Under the pretext of fighting terrorism, Russia officially intervened in Syria on September 30, 2015. Today marks the beginning of the eighth year of its military intervention, with no hope for positive outcomes.

Russian operations were a lifeline to the Regime, and Russian ambitions in Syria continue to influence the balance of power on the ground. Since its intervention, Russia has assisted the Syrian regime to launch brutal military campaigns on Aleppo city and its suburbs, southern and eastern Ghouta outside of Damascus, Homs, Daraa, and some parts of Idlib and Hama.

Their efforts have had catastrophic consequences on the humanitarian situation on the ground, massacring civilians, driving displacement, and destroying vital infrastructure. Syrian cities and towns outside regime forces control have become a battlefield for the Russian military arsenal. Russia has tested its own deadly weapons on Syrian bodies to benefit its arms trade, while leaving in its wake levels of destruction that has been described as the most devastating since the Second World War. Syria now requires years to recover from the consequences of this humanitarian catastrophe.

The Syrian Civil Defense has documented more than 5,700 Russian attacks. This number does not represent all the attacks by Russian forces, only the ones our teams responded to. There are a large number of attacks that our teams were unable to respond to and document. Furthermore, this number does not include joint attacks between the Assad regime and Russian forces, nor the attacks in areas unreachable to our teams.

These numbers represent only the civilians whom our teams were able to retrieve. Those injured at the scene and die after they are transported to the hospital or those injured that were unable to be retrieved, are not reflected in these numbers.

Our teams rescued 8,348 civilians injured by Russian bombings including 2,141 children and 1,707 women.

According to SCD documentation, Russian forces committed 262 massacres in Syria since the start of its direct military intervention in favor of the regime forces on September 30, 2015 until now. Russian massacres have resulted in the killing of 2,775 civilians, including 873 children and 552 women, as most involved Russian forces targeting civilian homes or markets and other crowded locations to result in the highest possible number of civilian causalities.

(A massacre is constituted as an attack that left 5 or more dead,

The Russian attacks focused on city centers, civilian homes and vital facilitis, with the aim of displacing civilians and destroying anything that provides life, support, and stability. 67% of these attacks targeted civilian homes (3,825 attacks), while agricultural fields ranked second in 17% of the attacks (961 attacks).

In addition, dozens of attacks targeted public buildings, gas stations, and other facilities.

The Russian attacks, numbering more than (5,700) since the beginning of the intervention, were distributed over most of the Syrian governorates, with Idlib holding the largest share of attacks (3,475), constituting 61%.

In addition, there have been more than 50 attacks on Homs, Damascus and Latakia.

Since the beginning of its aggression, Russian forces have launched thousands of air attacks following a scorched earth policy. The Syrian Civil Defense responded to more than 5,700 attacks. The weapons used in attacks on civilians by the Russian forces varied, 92% of which were air raids (5245). 320 attacks were launched with internationally prohibited cluster bombs, and 132 attacks used incendiary weapons on civilians. Other attacks included drones and surface-to-surface missiles.

From the first moments of the peaceful uprising that demanded change in Syria, Russia directly supported the regime forces with the weapons including rocket artillery, and unguided aircraft bombs. In March of 2021, artillery and missile attacks began to take on a new pattern in terms of greater accuracy and destructive capability. The cause behind these new highly accurate and destructive attacks was the introduction of laser-guided Russian Krasnpol shells. Our teams responded to the attacks carried out by the regime forces and Russia using these laser-guided Krasnopol shells and issued a report that monitors the use of this type of shells, including the effects of these shells, the methodology of their use to target public facilities, especially hospitals, humanitarian workers, and civilian homes.

Our teams documented 63 attacks using this deadly weapon. While only 4% of attacks in Syria between March 21 - December 31, 2021 used Krasnopol shells, these attacks resulted in 20% of all the civilian deaths.

Our teams documented 20 deaths and 102 injuries during the period. Children constituted a large number of victims as 29 children were killed and 33 others were injured. Among the victims were two volunteers from the White Helmets, who were killed during two separate attacks.

Destruction of Cities and Systematic Displacement

With the start of the Russian intervention in favor of the Assad regime in Syria, the number of displaced people dramatically increased as cities were emptied out. The initial result of the Russian intervention was the destruction of the eastern neighborhoods in the city of Aleppo in 2016 and the displacement of its residents. The displaced migrated to the western countryside of Damascus and the eastern neighborhoods of Damascus in 2017. 2018 witnessed displacement from a many number of areas including Eastern Ghouta and Qalamoun in Damascus countryside and the southern neighborhoods of Damascus, the northern countryside of Homs, and southern Syrian areas including Quneitra and Daraa.

The displacement campaigns, which were accompanied by intense bombing by Russian warplanes, were ceasless. The United Nations described the waves of displacement witnessed in northern Syria during the regime’s military campaign last year as the largest in Syria’s history, as more than 1,182,772 civilians were forced to leave their homes and escape death during 2019. The number of displaced people from November 2019 until the end of February 2020 reached more than 1,037,890 people, including those who were displaced more than five times at separate intervals in conjunction with the military campaigns launched by the regime and Russia on their areas in the countryside of Idlib, Hama and Aleppo, in addition to the cities near Contact lines such as Jericho, Sarmin, Darat Azza and Atarib.

The return of the forcibly displaced people in northern Syria to their homes in Idlib and the Aleppo countryside is still limited, despite the ceasefire signed on March 5.

Russian forces deliberately attacked Syria Civil Defense teams while they were working to save civilians with double tap strikes. 36 volunteers were killed and 163 other volunteers were wounded since the start of Russian intervention in 2015. Abdul Latif Aldhahik was the first volunteer who was killed on September 30th 2015 in Talbiseh city in the northern countryside of Homs after Russian warplanes targeted residential neighborhoods for the first time. Russian attacks destroyed more than 69 centers completely and partially.

Russia stands against a political solution in Syria

Russia’s alignment with the regime heightens divisions among Syrians and makes any hope of a political solution less likely given its conflict of interests with the Syrian people. Russian interests are represented in its control over natural resources including oil, phosphates, gas, and ports will have a devastating impact on Syria, preventing it from ever recovering from this conflict. Yet Russia’s maintenance of its interests in Syria depends on the privileges it receives from the al-Assad regime, and are therefore linked to its opposition to any political solution that undermine them.

Russian crimes against civilians in Syria, aimed at supporting the al-Assad regime, will continue as long as the international community turns a blind eye. The continued silence of the international has given Russia free reign to continue targeting civilians, razing their cities, and displacing their residents with impunity. Yet Russia’s actions must be reckoned with and met with accountability. The international community must fulfill its responsibilities to protect civilians in Syria and to hold the perpetrators of war crimes accountable.