Azaz is bleeding... 5 dead and 5 wounded in a terrorist massacre 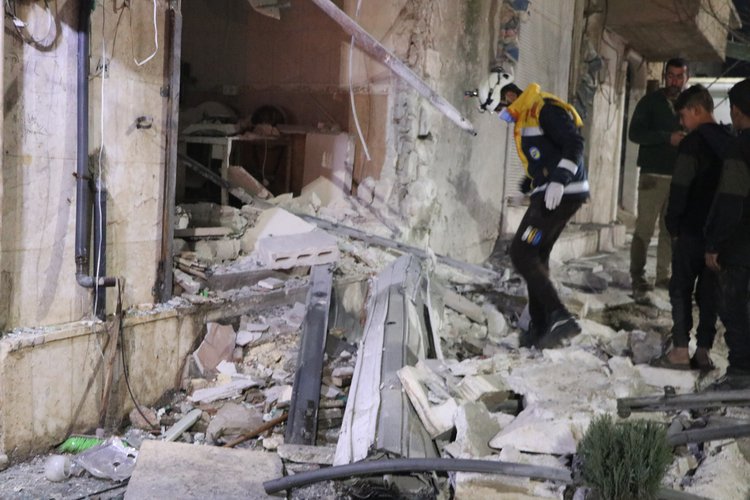 With the start of the 19th Astana meeting on Syria, civilians were killed and injured in the city of Azaz, north of Aleppo

On the evening of Tuesday, November 22, the city of Azaz in the northern countryside of Aleppo witnessed an escalation of terrorist attacks originating from areas controlled by the regime forces and the Syrian Democratic Forces.

5 civilians, including a child, were killed and 5 others were wounded in a massacre targeting residential neighbourhoods and a popular market with rockets, also causing significant damage to civilian property. The town of March in the same countryside was also subjected to similar shelling without any reported casualties.

This escalation comes at a time when Syrian regime forces, Russia, and the militias loyal to them continue to target villages, towns, camps, and other residential areas in northwestern Syria with the absence of any firm international action or stance to halt these attacks.

At the beginning of last August, the city of Azaz was subjected to similar shelling, injuring 6 civilians, including 4 women. Before that, in 2022, the city has witnessed many similar attacks targeting a public park crowded with children and women, a popular market, a medical clinic, and a pharmacy. These attacks have left 3 civilians dead, two of whom were students in the third year of mechatronics engineering at the "University of Aleppo in the Liberated Areas," and 7 wounded, including a child.

These attacks in the countryside of Aleppo were not limited to just the city of Azaz, as a civilian was injured by artillery shelling by the regime forces and Russia targeting residential neighborhoods in the village of Tadil and its outskirts in the western countryside of Aleppo.

On November 6, Syrian regime forces and Russia also committed a massacre after shelling displacement camps west of the city of Idlib and near the village of Kafr Jalis with surface-to-surface missiles carrying cluster bombs, killing 9 civilians, including 4 children and a woman, and wounding about 70 others.

From the beginning of this year until Sunday, November 20, The White Helmets responded to hundreds of attacks by Syrian regime forces, Russia, and militias loyal to them that targeted northwestern Syria. These attacks killed more than 150 people, including 53 children and 14 women. 433 others were injured, including 132 children and 64 women.

With each Astana meeting that concerns the state and future of Syria, the frequency of crimes committed against civilians increases in a continued policy of death and destruction practiced by Syrian regime forces, Russia, and their loyal militias against the Syrian people without any international accountability or actions towards putting an end to the attacks targeting innocent civilians.