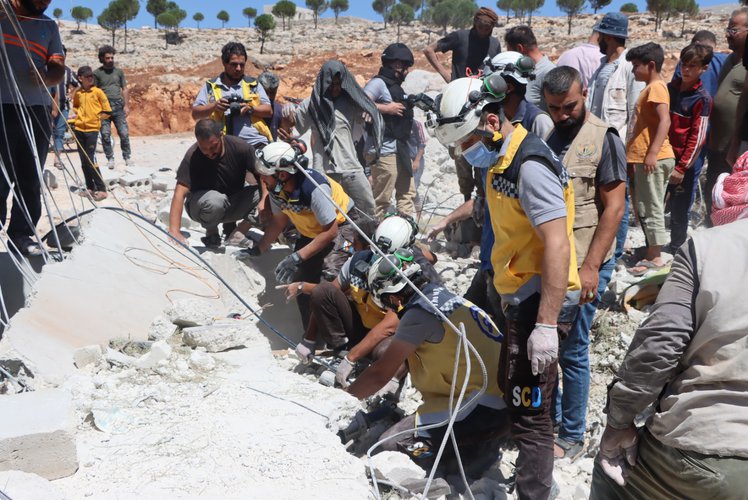 The international community fails to hold the perpetrators of these terrorist attacks accountable, leaving civilians under direct threat, unable to live in peace and security.

Today, July 24, a civilian was killed and two others, including a woman, were injured by missile attacks fired from the SDF and the regime controlled areas in Kwuat Al Rahma , an IDP camp in Kibar village of rural Afrin, north of Aleppo. This is considered a dangerous escalation, a new terrorist crime that suggests a systematic policy of targeting civilians as war and death continue to hang over the region.

A similar bombing targeted the forests of the Kafr Jannah area in the Afrin countryside, resulting in the outbreak of fires. Our teams put out the fires and grounded the area in order to prevent the fires from igniting again.

With heavy artillery, the regime forces and Russia targeted the villages of Kadora, Al-Fatirah, Sufuhun and Benin in the southern countryside of Idlib, causing material damage but no injuries.

Russian warplanes committed a massacre in Idlib countryside yesterday, Friday, July 22, killing and wounding 20 civilians, most of whom were children, by targeting a poultry farm inhabited by displaced people and civilian homes on the outskirts of Al-Jadida village in the western countryside of Idlib.

Targeting IDP camps is a war crime that must not go unpunished. This repeated targeting of camps, civilians and vital facilities in the cities and towns of northwestern Syria is a clear violation of international and humanitarian law. The international community fails to hold the perpetrators of these terrorist attacks accountable, leaving civilians under direct threat, unable to live in peace and security.