Landmines and Unexploded Ordnance… A Deadly Legacy for the Syrians 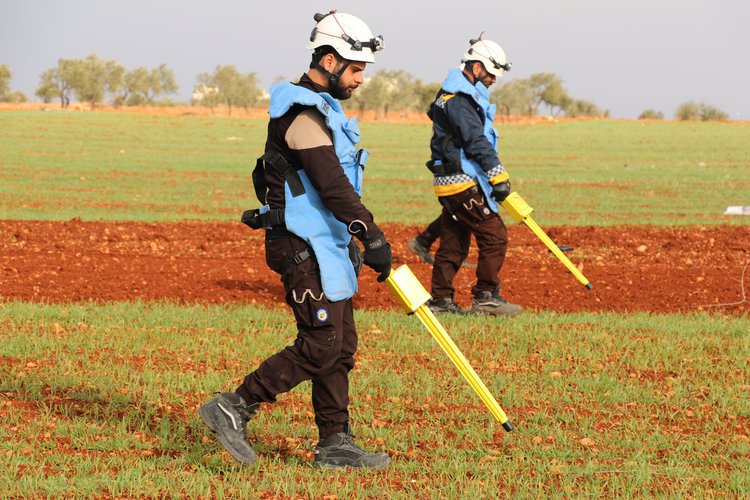 After 11 years of war, Syria ranks at the top of the list with the number of mines, unexploded ordnance, and victims to these remnants of war, according to the annual report of the International Coalition to Eliminate Cluster Munitions and the International Campaign to Ban Landmines (ICBL-CMC).

When the uprisings began in Syria in 2011, a variety of conventional and unconventional weapons were used by the Assad regime to suppress these popular movements. When Russia intervened on behalf of President Assad in 2015, the rate of bombings sharply increased as new forms of artillery were introduced into the scene.

The danger of these bombings and military attacks are not limited to only the immediate impact of death and destruction as these bombings leave behind a lasting legacy for years to come when thousands of munitions that bomb cities and agricultural lands fail to detonate on impact and remain between homes and on farm lands, retaining their ability to kill and waiting to be detonated.

These are known as unexploded ordnance (UXO) and explosive remnants of war (ERW). They are explosive weapons such as bombs, shells, grenades, land mines, cluster munition, and other munitions that did not explode when they were employed and still pose a risk of detonation, sometimes many decades after they were used or discarded.

According to the annual report of the International Coalition to Eliminate Cluster Munitions and the International Campaign to Ban Landmines (ICBL-CMC), in 2020 Syria recorded the highest annual death toll in the number of victims killed by landmines and remnants of war.

The report recorded 2,729 casualties in Syria, half of whom were children, out of 7,073 casualties total in the world. Furthermore, the report indicated that the death toll recorded in Syria had the highest recorded number of annual casualties since the observatory began monitoring the death toll from mines in 1999

Victims of Remnants of War in NW Syria

Large numbers of UXO and landmines are still present among civilian neighborhoods, in agricultural lands, and children play areas as a result of the sustained systematic bombing by the regime and Russian forces over the years that continue to this day. The remnants of war will have a lasting legacy. Scattered throughout Syria, they will remain a risk in the years to come, even if the war ends. Syrian Civil Defense efforts focus on tackling this issue head on in order to protect civilians' lives by carrying out disposal operations and giving workshops to educate civilians about the danger of unexploded ordnance. This work is imperative in helping to restore, nurture, and revitalize communities, enabling internally displaced persons to return to their homes, and allowing children to safely reach their schools and play places.

From the start of 2021 up until the first quarter of 2022, Syria Civil Defense teams have responded to 20 explosions from remnants of war that have resulted in the deaths of 15 people, including 8 children, and injuring 27 others. These numbers represent only the incidents that the SCD has documented and responded to.

In Syria, cluster bombs have been the most dangerous remnants of war due to their overwhelming use by the regime and Russian forces. Cluster bombs are dropped from aircrafts or fired from the ground, opening up in mid-air to release tens or hundreds of submunitions that indiscriminately spread over a wide area.

The percentage of bombs that do not explode immediately after hitting the ground may reach about 40%, which leads to devastating results for anyone who comes across them.

The International Campaign to Ban Landmines and the Cluster Munition Coalition (ICBL-CMC) published their twelfth annual report to monitor the use of cluster weapons in the world. The report concluded that Syria is the only country in the world that has witnessed the continuous use of cluster munitions since 2012. In 2020, Syria recorded the highest number of annual casualties where the outcome constituted more than half of the total (52%) victims worldwide.

Areas Where War Remnants Are Located

Remnants of war are scattered in most regions in Syria in various cities, villages, residential neighborhoods, and farmlands.

The remnants of war are spread widely throughout northwestern Syria, and are especially abound in the Al-Ghab Plain area, near the city of Jisr Al-Shughur, the eastern areas of Idlib city (Sarmin - Binnish - Taftanaz), southern Idlib in Jabal Al-Zawiya, the western Aleppo countryside, Al-Bab and Afrin areas in Aleppo countryside.

Beyond posing the risk of future death, these remenants of war prevent farmers from reaching their lands, industrialists from working in the places that were bombed, and deprive IDPs from returing their homes, especially in the areas that had been subjected to heavy bombings.

In 2016, Syria Civil Defense UXO teams began their work on destroying remnants of war in a time when no other NGO or party was handling this issue. Syria Civil Defense has specialized teams that deal with specific types of remnants of war. Unexploded Ordnance Disposal is one of the most dangerous and difficult missions. It includes several different activities, including surveying to identify contaminated areas, providing awareness-raising campaigns, and destroying the munitions and unexploded ordnance.

The mechanism of UXO teams’ work can be divided into three overlapping stages. It should be mentioned that our work teams do not work on the disposal of landmines.

1. Surveying operations: These operations are carried out in all northwestern regions of syria. There are six scan teams. They mark the contaminated areas in preparation for destroying the UXOs. In 2021 and first quarter of 2022, the scan teams have carried out 850 scanning operations in 500 different contaminated areas. After identifying the areas contaminated with munitions, maps are drawn and sent to the removal teams, who work in turn to get rid of each munition individually without moving it from its place

2. Disposal Operations: After reaching the marked contaminated areas, the teams carry out an accurate search process in the contaminated place, then, in a professional manner the teams start the process of destroying munitions (each munition separately). The teams are committed to destroying all munitions completely. In 2021 and first quarter of 2022, the UXO teams carried out 749 Disposal operations during which 859 munitions were destroyed.

There are 6 UXO (disposal ) teams distributed in northwestern Syria. They have disposed of more than 23,000 various munitions so far, including more than 21,000 cluster bombs, within their limited capabilities and through difficult working conditions. This high risk mission cost the team's 4 volunteers.

Over the past years, Syria Civil Defense UXO teams have documented the use of 60 types of various munitions that were used to kill civilians, including 11 types of internationally prohibited cluster bombs, which the regime and its Russian ally did not hesitate to use.

3. Community Awareness: The awareness process is considered one of the most important procedures in facing the danger of unexploded ordnance.

Syria Civil Defense UXO specialized teams conduct awareness sessions for civilians to provide proper education and identification of UXO and warn them about the danger of these munitions, focusing on the danger of explosive ordnance, the need to stay away from unusual objects, and the importance of informing Syria Civil Defense teams about suspicious looking objects immediately.

The removal of UXOs is an incredibly dangerous task. In the process of removing a UXO, the first mistake a team member makes might very well be their last.

Many members of our UXO teams have been injured in their line of work. Since the beginning of the work to remove the remnants of war, Syria Civil Defense has lost 4 volunteers.

Furthermore, there are logistical challenges related to the lack of advanced equipment. Advanced training is imperative for UXO teams to do their work properly are in dire need of advanced training because the training they have undergone is insufficient to deal with all types of ammunition and remnants of war.

A large number of unexploded ordnance that remains from the bombing of the regime and Russia, especially cluster bombs, of which we have documented the use of 11 types by Russia and the regime, makes the mission very difficult.

This is in addition to the nonstop bombings of the regime and Russian forces, which cause contamination of newly secured areas.

The Assad regime fails to remove the remnants of war

To this day, the Assad regime fails to provide a safe environment for civilians in regime controlled areas as they continue to neglect the removal of these remnants of war.

The areas that were recaptured by the regime have not yet witnessed campaigns or operations related to disposal or surveys to identify contaminated areas with munitions, especially in areas that have witnessed heavy bombing, such as the eastern neighborhoods of Aleppo and the areas of the northern and eastern Hama countryside, the city of Deir ez-Zor, the Ghouta of Damascus, Darayya and Zabadani, and the neighborhoods of Damascus (Yarmouk Camp, Qaboun, Jobar and Barzeh), Daraa Governorate, and many other Syrian regions.

Every day, explosions of these remnants happen and result in deaths of civilians, preventing tens of thousands of families from returning to their homes and working on their agricultural lands.

The continuation of the Assad regime and its Russian ally to use mines and cluster munitions is a systematic policy aimed at causing the greatest possible harm to the population. It also aims to prevent the displaced from returning to their homes and farming their lands. The White Helmets is committed in their work to restoring safety to the people of Syria.