Protect the children: since June, the Assad regime and Russia have killed 63 children 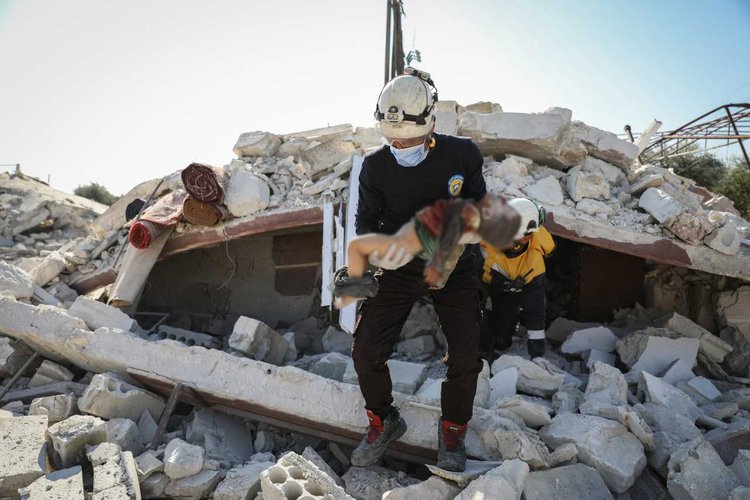 Over the past ten years, the children of Syria have been the main victims of the Assad regime and the Russian war on Syrians.

Today, Syrian children are close to the point of no return with far-reaching consequences for the loss of an entire generation, apart from tens of thousands who were killed or injured, and others lost in the displacement.

They struggle every day to return their lives back to normalcy but the effort seems to be futile. They have lost their dreams, opportunities, rights, and childhood. Being born in war makes them the most vulnerable victims both physically and psychologically. Their future can never be predicted, the only thing certain is that they will not fulfill their dreams.

Since June, 63 children were killed

Despite reaching the ceasefire agreement in northwest Syria on 6 March 2020, the regime and Russia have not stopped the killing, and the world has not blinked an eye to the constant bombings and killings of the Syrian people. Since June, the regime forces and Russia intensified their attacks on northwestern Syria resulting in the deaths of tens of civilians, most of them children. Since June, Syria Civil Defense documented the killing of 63 children from June 8 to November 17, 2021.

All were killed as a result of artillery attacks and air raids on the cities and villages in northern Syria. After four months of systematic attacks that lasted from the beginning of June to the end of September, the Civil Defense reported the deaths of 130 civilians, including 56 children. We noticed in the last military escalation in north west Syria there was an increase in the number of children casualties in proportion to the overall number of casualties.

Since the beginning of 2019, Syria Civil Defense documented the killing of more than 2,600 civilians, including 640 children in NW Syria. These figures only represent civilians to whom the teams could respond.

During the bombing campaign, the regime forces and Russia continued targeting civilian houses and vital facilities to kill as many people as possible and displace them from their homes.

Due to the constant exposure to violence, extreme anxiety, and shock, the number of children who have had psychological and social suffering has doubled. The instability and absence of an appropriate environment, especially in the camps, poses a psychological disaster that threatens this generation, and future generations of Syria.

In northwest Syria, more than 500 thousand children live in IDP camps with more than 1.5 million civilians who were forcibly displaced from many regions of Syria. The camps lack infrastructure and the essential needs of adequate living. Last year, a child died and four others were wounded after their tent collapsed due to the floods and wind. As the winter approaches, people suffer from floods, rain, and cold weather, with the inability to afford heating materials due to the tough living conditions. This winter will be the worst one yet for the children as the camps are considered the most vulnerable populations subject to the spread of Covid 19 due to tent conditions and the inability to adequately social distance.

Most of the families are unable to afford the basic needs of food, so they will not be able to provide personal hygiene and protection such as masks, water, and sanitation services. This will lead to form a suitable environment to spread viruses, especially seasonal viruses, complicating the response to the pandemic as the number of deaths and new cases continue to rise dramatically, and with a complete disability in the health sector due to the fragile infrastructure, which was destroyed by the bombings of the Assad regime and Russia.

Schools are permanent targets of the Assad regime and Russian attacks

Wars leave behind residual long lasting effects that don't end easily. The most dangerous ones are the attacks on educational facilities because generations and futures will be destroyed and its disastrous consequences will remain for decades. The education system in Syria is broken and exhausted by the years of war. Proper and adequate education is not being provided and educational facilities are either partially damaged or completely destroyed. It has become a clear scar and the children are paying the price. The Assad regime and Russia's relentless attacks on schools and educational facilities are not only to destroy infrastructure and kill children, but also to kill Syria's future.

Since 2011, Russian and the regime forces' military operations and systematic bombings have devastated thousands of schools.

During the past three years, northwest Syria has been subjected to military bombing campaigns since 2019 until today. Despite the ceasefire agreement that entered into force in March 2020, the attacks have decreased, but have not stopped. Syria Civil Defense responded to more than 135 attacks by the regime forces and Russia on schools and educational facilities in northwest Syria, documenting 89 attacks in 2019, 40 attacks in 2020, and more than five attacks since the beginning of this year.

According to the Education Directorate of Idlib, which covers Idlib and the western countryside of Aleppo, there are around 1,200 schools with various levels of security. Some of them are dangerous, while others are safe. 94 schools are closed because they are either on the frontlines with regime forces or are temporary shelters for displaced people.

350 thousand students go to schools in Idlib and West countryside of Aleppo, and 60% of them are between 6 to 9 years old

The targeting of schools by regime and Russian forces is not a coincidence, but a systematic strategy to destroy the future of Syrian children.

Child labor has become a reality in Syria as a result of theconditions produced by the conflict and the loss of a large number of head of households or sources of income after the Assad regime and Russia forcibly displaced their homes. This resulted in a terrible reality that needs a tremendous deal of effort to recover from. More than 2.4 million Syrian children have not attended school.According to UNICEF reports, 40% of them are girls. The number has likely increased in the last year due to the effects of the pandemic, which increased the suspension of education in Syria.

UNICEF stated that 6.1 million Syrian children need help, a 20% increase over the last year. With fuel shortages and the sharp rise in food prices, poverty is drastically increasing, forcing children to drop out of school and go to work.

The international community and United Nations organizations must stop the killing of children and the destruction of their future. The absence of any real punishment and accountability towards the Assad regime has allowed them to continue committing and advancing their atrocitiesThe regime, backed by Russia, now uses advanced and highly accurate weaponry, leaving no room for doubt that its attacks were deliberate acts aimed at killing and threatening civilians, especially children.

The international community must take immediate action to end the deadly attacks on children, protect them, hold those who committed the crimes against them accountable, and spare no effort to support children return their lives back to normalcy. They are the only guarantors of the future of Syria.