Russian escalation in Idlib countryside... 7 dead, including two children, in a massacre of warplanes 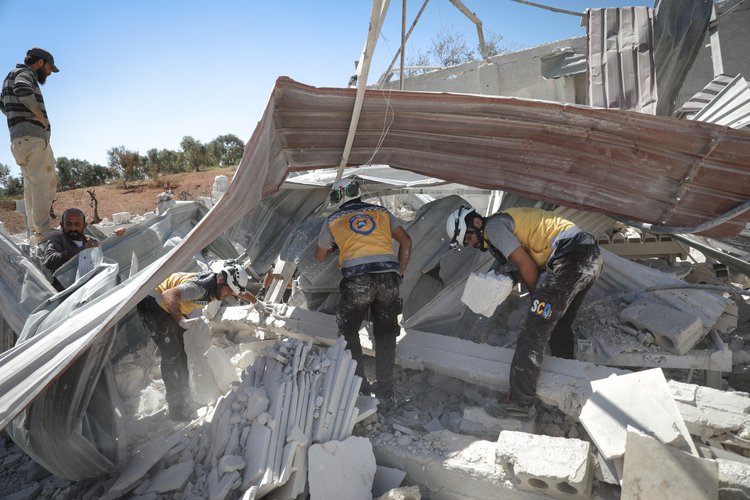 The international community continues to remain silent about the Russian and Syria regime terrorist attacks on civilians in northwest Syria, failing to hold the criminals accountable.

Russian forces escalated their air and missile attacks on Idlib countryside today, Thursday, September 8, killing 7 civilians, including 2 children, and wounding 15 people, including 4 children. This escalation threatens the lives of civilians and imposes a state of instability and destruction of infrastructure, without any effective international action to end the tragedy Syrians and holding the Assad regime and Russia accountable for their crimes.

Russian forces targeted a stone sawmill and a house adjacent to it in the village of Hafsarja, west of Idlib, with three air strikes, killing 7 civilians, including 2 children, and wounding 10 others, including 4 children. Most of the victims were workers in the sawmill.

Russian warplanes also launched more than 10 air raids on the outskirts of the village of Al-Ghafir in the Roj plain, west of Idlib, in conjunction with targeting the area with a surface-to-surface missile (9M79 Tochka) carrying (9n24) cluster bombs, injuring 5 people.

A woman was wounded as a result of artillery shelling by the regime and Russian forces targeting the village of Deir Sunbul, south of Idlib, and the villages of Benin and Shanan were similarly bombed, but no injuries were reported.

On July 22, Russian forces committed a similar massacre, killing 7 civilians, including 4 children from the same family, and wounding 13 others, including 8 children, by targeting with air strikes a poultry farm inhabited by displaced persons and civilian homes on the outskirts of Al-Jadida village, in the western countryside of Idlib.

Since the beginning of the current year 2022 until yesterday, Wednesday, September 7, the Syrian Civil Defense responded to 400 attacks on civilians in northwestern Syria by the regime forces, Russia, and militias loyal to them. These attacks killed 91 people, including 32 children and 11 women, and injured 212 people, including 73 children and 27 women.

The terrorist attacks perpetrated by the Russian forces today after targeting a sawmill in the village of Hafsarja and killing workers and civilians, as well as the us of internationally prohibited cluster munitions to target the Al-Ghafar area in the Sahel Al-Rouj, are a continuation of a systematic policy of killing and displacement practiced by Russia in its support of the Assad regime. For years, the international silence on these crimes in light of an unprecedented humanitarian crisis without any deterrent or accountability continues to provide a green light for these humanitarian violations.