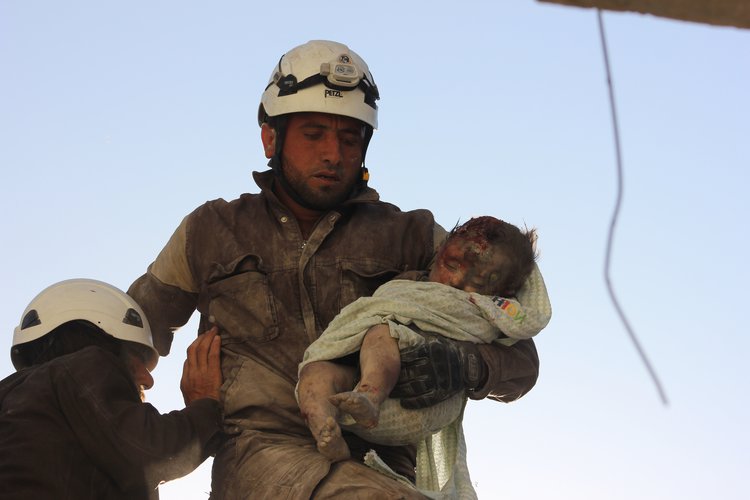 Under the pretext of fighting terrorism, Russia officially intervened in Syria on September 30, 2015. Today marks the beginning of the sixth year of its military intervention, with no hope for positive outcomes.

Russian operations were a lifeline to the Regime, and Russian ambitions in Syria continue to influence the balance of power on the ground. Since its intervention, Russia has assisted the Syrian regime to launch brutal military campaigns on Aleppo city and its suburbs, southern and eastern Ghouta outside of Damascus, Homs, Daraa, and some parts of Idlib and Hama.

Their efforts have had catastrophic consequences on the humanitarian situation on the ground, massacring civilians, driving displacement, and destroying vital infrastructure. Syrian cities and towns outside regime forces control have become a battlefield for the Russian military arsenal. Russia has tested its own deadly weapons on Syrian bodies to benefit its arms trade, while leaving in its wake levels of destruction that has been described as the most devastating since the Second World War. Syria now requires years to recover from the consequences of this humanitarian catastrophe.

More than 12,000 killed or injured civilians

According to the Syrian Civil Defense (SCD) teams’ documentation efforts, since September 30, 2015 to September 20, 2020, 3,966 civilians were killed, including children and women. These figures only represent civilians to whom the teams could respond and bodies that the teams could recover, and the actual number is much higher. Civilians who died after being treated or within days of their injury are also not included in the teams’ documentation efforts. The White Helmet teams have rescued 8,121 civilians who were injured by Russian aerial raids and artillery shelling.

While responding to these attacks, the SCD has lost 36 volunteers, and 158 volunteers were injured as a result of double taps and the direct targeting of teams during search and rescue operations while they carried out their humanitarian duty.

According to SCD documentation, Russian forces committed 182 massacres in Syria since the start of its direct military intervention in favor of the regime forces on September 30, 2015 until now. Russian massacres have resulted in the killing of 2,228 civilians and the injury of 3,172 others as most involved Russian forces targeting civilian homes or markets and other crowded locations to result in the highest possible number of civilian causalities.

Russian attacks – mainly airstrikes – have focused on city centers, civilian homes, and vital facilities with the aim of displacing civilians and destroying infrastructure that supports their stability. According to our records, 69% of these attacks have been on civilian homes (3,784 attacks) while agricultural fields were the second most targeted sites with 15% of attacks (821 attacks). Primary and secondary roads constitute 6% of the total attacks (324 attacks). Hospitals and medical centers were attacked 70 times, SCD centers were exposed to 59 attacks, popular markets faced 53 attacks, schools faced 46 attacks and civilian camps hosting IDPs faced 23 attacks. These attacks are in addition to dozens of attacks targeting mosques, bakeries, factories, and public buildings.

Since the beginning of the Russian intervention, Russia launched 5,476 attacks across Syrian governorates. Idlib was exposed to the largest number of attacks (3,279), while Aleppo and its countryside were targeted 1,167 times, Hama was targeted 515 times, and rural Damascus was targeted 255 times. Of all the years since the beginning of the intervention, 2019 was the most violent, with Russian forces carrying out 1,567 attacks.

Russia has followed a scorched-earth policy in its military efforts in support of the regime forces over the past five years. Russia has also used a range of weapons in its attacks on civilians, with aerial strikes constituting the largest share (92%), numbering 5,025 aerial raids. Russia also launched 318 attacks using internationally banned cluster bombs, and 130 attacks with incendiary weapons.

Forced displacement and the emptying of cities

In 2019, these displacement campaigns, accompanied by intense bombardment by Russian warplanes, continued while the United Nations described them as the largest in Syrian history. According to the Syrian Response Coordination Group (SRCG) more than 1,182,772 civilians were forced to leave their homes and flee death in 2019, while in the period between November 2019 and February 2020, an estimated 1,037,890 people were forcibly displaced. Many of those displaced during this period have been displaced more than five times consecutively at different times, due to the Russian and regime campaigns launched in the countryside of Idlib, Hama, and Aleppo as well as cities close to the frontlines, such as Ariha, Sarmin, Darat Azza and al-Atarib.

Half a million displaced people have sought refuge in IDP camps on the border with Turkey, which already sheltered around 1 million IDPs, bringing the total number of IDPs to 1.5 million. Other IDPs headed to the northern and eastern countryside of Aleppo, mainly to the areas of Afrin, Azaz, al-Bab, and Jarablus.

The IDPs most recently displaced by the regime and Russia’s military campaign have yet to return to their places of origin in the countryside of Idlib and Aleppo. Despite the ceasefire signed on March 5, 2020, a limited number of IDPs have returned to their homes, especially because the regime and Russia continue to breach the ceasefire on a daily basis by targeting civilian homes with aerial and artillery fire.

Russia has attempted to force truces under threat of military invasion. These truces aimed at isolating areas and consolidating control on the ground by threating those who attempt to resist. In several cases, truces were reached with only the regime and Russia acting as signatories, without any international guarantees. Among the most important of these truces, which Russia managed to disavow with disastrous effects, despite being a party, was the de-escalation agreement signed in May 2017. That agreement included four de-escalation zones in Idlib province and certain parts of Lattakia, Hama, and Aleppo; the truce also reached to areas in the north of Homs governorate, the eastern Ghouta in Damascus countryside, and areas in southern Syria in Deraa and Quneitra provinces. Rather than abiding by this agreement, Russia seized these areas one by one after leveling them. Today, the de-escalation zone number one, which includes Idlib and parts of Aleppo, Latakia, and Hama, remains outside Russian and regime control and hosts around four million people

On September 17, 2018, Turkey and Russia reached the Sochi Agreement concerning Idlib, yet Russia has violated this agreement as well. On April 26, 2019, Russia supported regime forces by launching a military campaign on northern Syria which continued until March 5, 2020, when a ceasefire agreement was signed. The ceasefire came into effect on March 6, 2020, but regime forces and Russia violate the ceasefire daily and constantly threaten to launch a new military campaign.

Political support in the Security Council

Russia has continued to support the al-Assad regime not only militarily, but also politically, employing 16 vetoes before the UN Security Council. Recently, it vetoed the extension of the mandate for the mechanism to allow cross-border aid into Syria, in an attempt to put pressure to limit the aid operations to one border-crossing. On the human rights front, Russia has consistently voted all Human Rights Council resolutions, including by voting against extending the work of Independent International Commission of Inquiry on the Syrian Arab Republic, the establishment of the independent impartial investigation mechanism, and the work of the Chemical Weapons Disarmament Commission.

In June 2020, Russia withdrew from the United Nations-led voluntary mechanism to protect hospitals and humanitarian aid shipments in Syria from being targeted. Its withdrawal is evidenced by its aggression towards civilians in a clear disavowal of all humanitarian values and a lack of respect for international law. Russia’s former participation in the mechanism had not prevented its forces from systematically targeting hospitals and civilian facilities, as has been documented by various neutral parties with conclusive evidence.

Russia stands against a political solution in Syria

Russia’s alignment with the regime heightens divisions among Syrians and makes any hope of a political solution less likely given its conflict of interests with the Syrian people. Russian interests are represented in its control over natural resources including oil, phosphates, gas, and ports will have a devastating impact on Syria, preventing it from ever recovering from this conflict. Yet Russia’s maintenance of its interests in Syria depends on the privileges it receives from the al-Assad regime, and are therefore linked to its opposition to any political solution that undermine them.

Russian crimes against civilians in Syria, aimed at supporting the al-Assad regime, will continue as long as the international community turns a blind eye. The continued silence of the international has given Russia free reign to continue targeting civilians, razing their cities, and displacing their residents with impunity. Yet Russia’s actions must be reckoned with and met with accountability. The international community must fulfill its responsibilities to protect civilians in Syria and to hold the perpetrators of war crimes accountable.