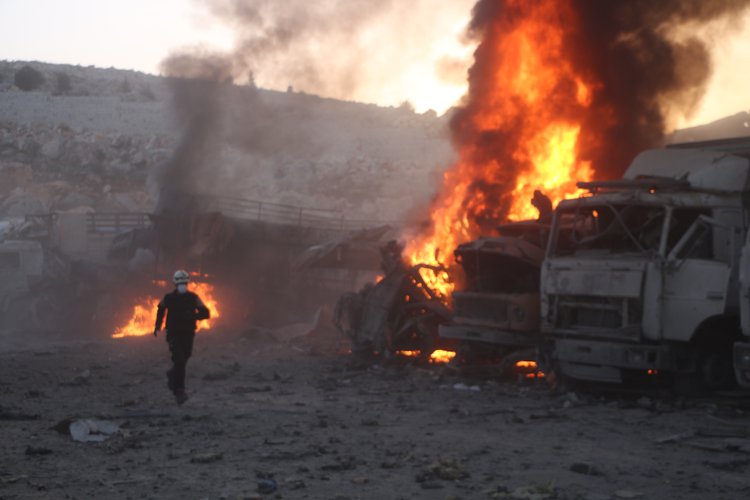 Russia proved without a doubt it does not care about the economic collapse, the destruction of the infrastructure, the displacement of the civilians, nor the collapse of the health or education systems. It cares only about its interests in having the natural resources and securing military bases that guarantee a long-term presence in the middle east.

Syrians are approaching the seventh year of Russia’s military intervention in Syria and its support in the Assad regime’s war against the Syrian people. Syrians have since witnessed and experienced a great deal of death and displacement.

This year, it seems nothing more than a continuation of the same strategy, which has been made clear that its main aim is to destroy any effort to alternate to the Assad regime.

Russian military intervention has had catastrophic consequences on the humanitarian situation on the ground, massacring civilians, driving displacement, and destroying vital infrastructure. Syrian cities and towns outside regime forces’ control have become a battlefield for the Russian military arsenal. Russia has tested its own deadly weapons on Syrian bodies to benefit its arms trade, while leaving in its wake levels of destruction that have been described as the most devastating since the Second World War. Syria now requires years to recover from the consequences of this humanitarian catastrophe.

More than 12 thousand killed or wounded

Syria Civil Defense documented 5586 Russian attacks on the Syrian people since the Russian intervention in Syria on September 30, 2015. This statistic does not represent all of the attacks but only those to which the teams have responded to.

The documentation teams reported the deaths of 4018 civilians, including children and women. This number is only a representation of the civilians to whom teams could respond to and recover their bodies. The teams do not document the deaths of the people who were being transferred to hospitals or the injured who died after long-term treatment.

Our rescue teams saved 8272 civilians, all of them were injured by the Russian attacks.

During the last six years, Syria civil defense documented more than 272 attacks by Russian forces. Each one of the 272 attacks killed and wounded at least 10 civilians. These attacks killed 2448 and wounded 4658. Syria civil defense documented 184 massacres with each of the massacring event resulting in the death of at least 5 civilians with the the death toll reachinf 2271.

Russian forces deliberately attacked Syria Civil Defense teams while they were working to save civilians. 36 volunteers were killed and 163 other volunteers were wounded since the start of Russian intervention in 2015. Abdul Latif Aldhahik was the first volunteer who was killed on 30 September 2015 in Talbiseh city in the northern countryside of Homs after Russian warplanes targeted residential neighborhoods for the first time. Russian attacks destroyed more than 60 centers completely.

The geographical and time of Russian attacks

Russia has followed a scorched-earth policy in its military efforts in support of the regime forces over the past six years. Russia has also used a range of weapons in its attacks on civilians, with aerial strikes constituting the largest share (92%), numbering 5,031 aerial raids. Russia also launched 319 attacks using internationally banned cluster bombs, 130 attacks with incendiary weapons, drones attacks, and two attacks with land missiles .

Russia provides the regime with weapons, especially laser guided Krasnopol shells which have high precision. The regime uses them to target the civilians and Syria civil defense teams that resulted in deaths of many civilians in August , June and July of this year.

In 2019, these displacement campaigns, accompanied by intense bombardment from Russian warplanes. The United Nations described them as the largest in Syrian history. According to the Syrian Response Coordination Group (SRCG), more than 1,182,772 civilians were forced to leave their homes and flee death in 2019, while in the period between November 2019 and February 2020, an estimated 1,037,890 people were forcibly displaced. Many of those displaced during this period have been displaced more than five times consecutively at different times due to the Russian and regime campaigns launched in the countryside of Idlib, Hama, and Aleppo as well as cities close to the frontlines, such as Ariha, Sarmin, Darat Azza and al-Atarib.

Half a million displaced people have sought refuge in IDP camps on the border with Turkey, which has already sheltered around 1 million IDPs, bringing the total number of IDPs to 1.5 million. Other IDPs headed to the northern and eastern countryside of Aleppo, mainly to the areas of Afrin, Azaz, al-Bab, and Jarablus.

The IDPs most recently displaced by the regime and Russia’s military campaign have yet to return to their places of origin in the countryside of Idlib and Aleppo. Despite the ceasefire signed on March 5, 2020, a limited number of IDPs have returned to their homes, especially because the regime and Russia continue to breach the ceasefire on a daily basis by targeting civilian homes with aerial and artillery fire.

Three years after the regime forces took control of Daraa governorate, the governorate returned in the middle of this year to be the subject of a new wave of displacement after the residents refused to participate in what is the so-called presidential elections.

The main objective of the recent escalation in the province was the demographic change and displacing of its residents, which proves that Russia was never a guarantor, but rather a partner in killing Syrians and in the war crimes committed by the Assad regime