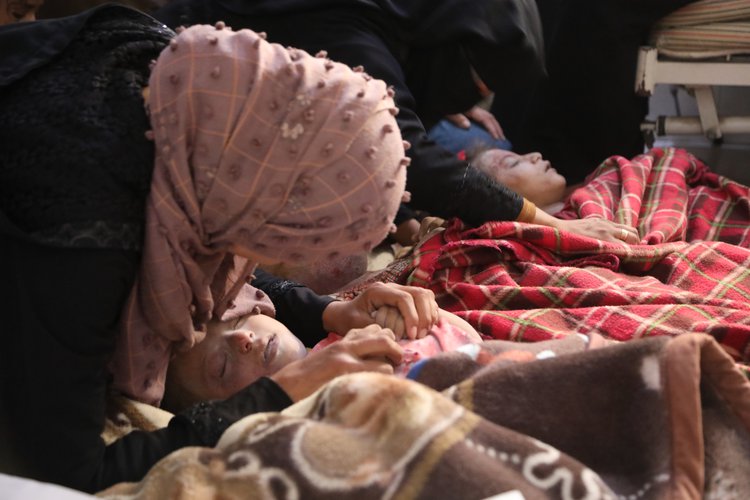 In 2022, our teams documented the tragic loss of 165 lives, with 55 of those being children and 14 being women. These casualties resulted from over 800 attacks carried out in northwestern Syria by the Assad regime, Russia, and their loyal militias. Despite these devastating losses, our teams were able to rescue 448 people who were injured in these attacks, including 134 children.

As the new year begins, Syrians are left to bear the weight of their ongoing tragedy, with little hope for an end to the violence. Despite dreams of an end to the bombings, displacement, and a safe return to their homes and villages, the war enters its twelfth year with no resolution in sight. The Assad regime and Russia continue to commit crimes against the Syrian people, with the international community remaining largely passive.

Similar to years past, terrorist attacks and killings perpetrated by the regime and Russia have persisted throughout the war. Even in refugee camps, Syrians are not safe from the atrocities of the conflict. International negligence has only served to compound their suffering, with the Assad regime using food insecurity and the destruction of the health and education sectors as tools of oppression.

The year 2022 began on a tragic note, with Russian planes targeting civilians in the Al-Nahr Al-Abyad area near Jisr Al-Shughour in the western countryside of Idlib. This attack resulted in the deaths of 3 civilians, including 2 children and 1 woman, and the injury of 10 others, 6 of whom were children. For Syrians, the new year brings only a continuation of the killings at the hands of Russia.

(This report covers the time frame starting from the beginning of 2022 until December 18th of the same year.)

Throughout the year 2022, The White Helmets recorded a high level of violence and systematic attacks by the Assad regime, Russia, and their loyal militias, particularly targeting essential infrastructure, civilian facilities, and sources of food security in northwestern Syria. Russian air strikes stood out as particularly frequent and violent among these attacks.

The year 2022 saw a staggering loss of life at the hands of the Russian air forces, the Assad regime, and their loyal militias. According to documentation by The White Helmets, 165 people were killed, including 55 children and 14 women, as a result of the attacks. The White Helmets teams were able to rescue 448 people who were injured in these attacks, including 134 children.

Massacres and their Civilian Victims

Throughout the year, the regime forces, Russia, and their loyal militias, as well as other parties, carried out a total of 9 massacres in northwestern Syria. These attacks resulted in 73 deaths, including 29 children and 8 women, and the injury of 174 individuals, including both children and women. The targeted locations included markets, public buildings, factories and camps for the displaced.

February of 2022 was particularly violent in terms of the number of massacres and their victims, with 3 massacres taking place during the month and resulting in 26 deaths. These senseless acts of violence undermine the stability and well-being of civilians and prevent them from leading normal lives.

In 2022, our teams responded to attacks on 177 different cities and towns across northwestern Syria.

The deliberate targeting of displacement camps in northwestern Syria represents a grave escalation in the suffering of those who have been forced to flee their homes, as it violates basic human values and deprives the displaced of their last refuge, as well as their basic necessities for survival and stability.

Our teams documented 14 attacks on displacement camps in northwestern Syria by the Assad regime, Russia, and their loyal militias during the year 2022, resulting in 14 deaths and 81 injuries. One of the most recent attacks occurred on November 6th, when the regime forces and Russia targeted several camps (Maram, Watan, Wadi Haj Khaled, Kafr Rouhin Water Station Camp, Morin Village Camp, Baeiba Camp) west of Idlib city with surface-to-surface missiles loaded with internationally banned cluster bombs, resulting in the deaths of 9 civilians, including a mother and her unborn child, and injuries to around 70 others. The Kuyet al-Rahma camp was also repeatedly targeted by missile and artillery shelling from areas controlled by the regime forces and the Syrian Democratic Forces in the northern countryside of Aleppo.

These repeated attacks on displacement camps, civilians, and vital infrastructure in cities and towns across northwestern Syria constitute a clear violation of international and humanitarian law. However, the international community has failed to hold the perpetrators accountable, leaving civilians to continue to be directly targeted and at risk, unable to live in peace and security.

Violent attacks using artillery shells and rocket launchers from areas jointly controlled by the Assad regime and Syrian Democratic Forces have destabilized the lives of civilians in the northern countryside of Aleppo. The cities of Afrin, Al-Bab, and Azaz were among the most affected by these attacks, resulting in 46 deaths and 132 injuries, including women and children.

Cluster bombs pose a significant threat to the safety of civilians in northwestern Syria, due to the difficulty of limiting the contamination of the areas they are used in and the continuous use of these bombs by the Assad regime and Russia in their attacks on civilians.

Throughout the year, our teams responded to 5 internationally prohibited cluster bomb attacks. These included a surface-to-surface missile attack loaded with cluster bombs on the Kafr Jalis camps, west of Idlib, which killed 9 civilians and injured around 70 others, and a similar attack on the farms of Khirbet al-Natour, injuring two farmers working in the olive harvest. Additionally, there was a third attack on the outskirts of the town of Basnqul, south of Idlib, a fourth attack on the farms of the village of Al-Ghafer, west of Idlib, and a Russian air strike loaded with incendiary cluster bombs targeted the western outskirts of the city of Idlib.

Cluster munitions do not have a specific target. Rather, they indiscriminately scatter over large areas and a significant percentage of the bombs do not explode immediately after impact, which can reach about 40% according to the United Nations, leading to devastating consequences for anyone who encounters them later. The White Helmets teams have documented the use of more than 11 types of cluster bombs (all of which are Russian made) by the Assad regime and Russia.

Guided Missiles and Their Devastating Impact on Civilians

The Assad regime and Russia have implemented a systematic policy of targeting civilians, particularly farmers, with guided missiles in an effort to inflict as many casualties as possible and prevent them from working on their agricultural lands. These attacks are particularly frequent during harvest seasons and are concentrated in areas close to the frontlines.

In 2022, our teams responded to 28 targeted missile strikes by the Assad regime and Russia, which killed 13 civilians, including two children and a woman, and injured 41 others, including 12 children and 4 women. The attacks were concentrated in the southern countryside of Idlib, as well as the eastern countryside of Idlib and western Aleppo, and mainly targeted farmers while they were working on their land to provide for their families or during olive harvests.

Explosions caused by rigged motorcycles and cars, as well as explosive devices and planted mines, continued to be a major threat to civilians. The White Helmets recorded 29 explosions caused by explosive devices, 18 unknown explosions, 15 landmines, and 3 rigged motorcycles. The northern and eastern countryside of Aleppo, which are densely populated with civilians, saw the highest number of these explosions, leading to a high number of civilian casualties.

The Deadly Legacy of Remnants of War

As the regime forces and Russia continue to use cluster bombs and other munitions, Syrians face a long-term threat to their lives for generations to come. Remnants of war are particularly dangerous to children, who may not understand the dangers of these weapons, their forms, and the risks they pose.

Since the beginning of 2022, The White Helmets have documented 32 explosions of remnants of war in northwestern Syria, killing 29 people, including 13 children, and injuring 31 others, including 22 children and a woman. Our teams responded to most of these explosions caused by remnants of war.

The unexploded ordnance clearance teams in the Syrian Civil Defense have conducted over 780 non-technical survey operations in over 260 areas contaminated by munitions, removed 524 various munitions, including 430 cluster bombs, through 449 removal operations, and provided 1,080 awareness sessions about the dangers of mines and war remnants, benefiting approximately 20,000 civilians, including children and farmers.

As the war in Syria enters its twelfth year and the Assad regime, Russia, and their loyal militias continue to commit crimes against civilians in northwestern Syria, the tragedy of the Syrians deepens and the humanitarian needs gap widens, with no solutions in sight to end the war and no clear international stance on the crimes against humanity committed by the regime and Russia against civilians.

Another year of Syrian exile has passed, in which Syrians have endured the horrors of bombing, displacement, and winter, hoping to end the war, rebuild their homes and villages, and return safely. These hopes, which have accompanied them from the past year, continue into the new year, with the hopes that the Assad regime and Russia will be held accountable for their crimes, that detainees will be released from the "cellars of death," and that the displaced will be able to return home. These are wishes that the Syrians will never allow to die.