The White Helmets participates in the 2022 Cluster Munition Monitor 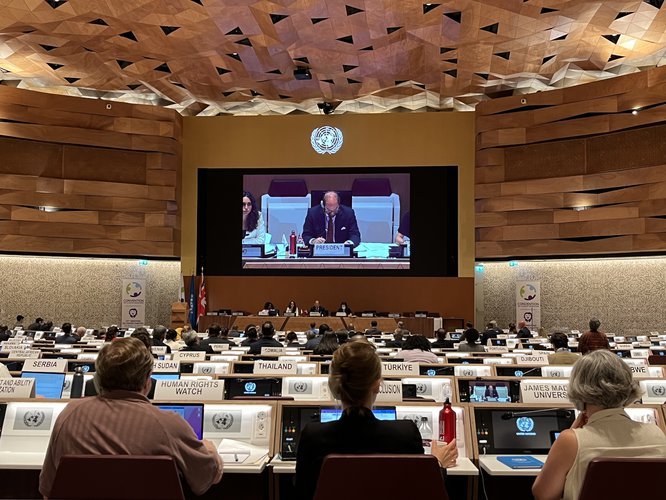 The White Helmets attended the tenth meeting of States Parties to the 2008 Convention on Cluster Munitions, held in Geneva from August 30 to September 2. During the conference, a side event was also held to promote and discuss the 2022 Cluster Munition Monitor report that provides detailed information on both the survey and clearance of cluster munitions as well as on casualties and victim assistance. The White Helmets contributed to this report by providing data related to the non-technical survey of areas contaminated with cluster munitions and their subsequent disposal. By participating in this report, The White Helmets seeks to draw attention to the devastating long-term impact that unexploded ordnance will have on the future of Syria and its people.

The 2022 Cluster Munition Monitor states that one third of the inhabited communities in Syria are affected by explosive remnants of war (ERW). The humanitarian needs resulting from this contamination remain at critical levels as mine action programs continuously suffer from a lack of funding, expertise, and adequate attention. The report added that although the full extent of cluster munition contamination is still unknown, it is certainly widespread due to the repeated use of cluster munitions throughout the past eleven years in Syria. The report found a 23% increase in the number of accidents caused by ERW in 2022 compared to 2020.

According to the report, attacks using cluster munitions were recorded in the governorates of Aleppo, Hama, and Idlib during the year 2020 and the first quarter of 2021, while 13 of the country’s 14 governorates (all except Tartous) witnessed the continuous use of cluster munitions since 2012. The report indicated an increase in the use of BM-30 SMERCH and BM-27 URGAN cluster munitions, delivering mostly submunition types 9M55K, 9M27K, and 9M27K1, which were launched from stationary platforms.

The report also remarked on the efforts of the White Helmets in survey and disposal operations in northwestern Syria, as well as the risks that White Helmets UXO teams face, such as the injury of a volunteer in 2021 during a clearance task.

Statistics of response to the remnants of war since 2020

Millions of civilians in Syria live in areas contaminated by mines and unexploded ordnance (UXO) as a result of the years of bombing by Russia and the Syrian regime. These remnants of war pose a major long-term threat to the lives of the population, directly affecting the stability of civilians, especially children and agricultural workers. These remnants remain spread across cities and villages, residential neighborhoods, and agricultural lands.

During 2020, our UXO teams responded to more than 60 explosions from remnants of war in northwestern Syria that killed 32 people, including 6 children and 4 women, and injured 65 others, including 7 children and 13 women.

While the explosions of remnants of war decreased by about half in 2021, that year UXO teams responded to 32 explosions, which killed 18 people, including 5 children, and injured 32 others, including 11 children.

Since the beginning of this year until Sunday, August 28, we documented 21 explosions from remnants of war in northwestern Syria that killed 18 people, including 5 children, and injured 23 others, including 14 children and a woman.

Cluster bombs are the most dangerous remnants of war

Unexploded ordnance of all kinds are dangerous, however in Syria, cluster bombs pose the greatest threat to civilian lives due to their extensive use by Russia and the Syrian regime.

Cluster munitions are indiscriminate, they spread randomly in large areas, and have a high failure rate compared to other types of munitions. According to the United Nations, about 40% of cluster bomblets do not immediately explode upon hitting the ground. These unexploded cluster munitions lead to devastating results for anyone who encounters them. The White Helmets have documented 11 types of cluster bombs (all Russian-made) used by Russia and the Syrian regime.

The White Helmets responded to 20 cluster bomb attacks on northwestern Syria during 2020, two of which targeted two schools, one attack on a popular market, and 11 attacks that targeted civilian homes. The rest of the attacks targeted roads and agricultural areas. In 2021, we responded to three cluster attacks launched by the regime forces and Russia, one targeting a fuel market and two targeting primitive fuel refining stations in the eastern countryside of Aleppo. From the beginning of 2022 until August 28, we responded to one attack by Syrian regime forces and Russia targeting the Southern Idlib countryside.

Specialized teams in The White Helmets deal with specific types of ERW. UXO removal is amongst one of the most dangerous and difficult services that The White Helmets volunteers provide. UXO teams perform several different types of operations, including surveying to identify contaminated areas, awareness-raising operations, and disposal of munitions. UXO teams began to dispose of ERW in 2016 in order to reduce the threat to thousands of civilians, in the absence of any other organization working in this field.

The UXO teams in The White Helmets carry out three main activities. It must be noted that our teams do not carry out subsurface clearance of ERW or landmines.

1- Non-technical survey: There are 6 teams that carry out tasks in surveying villages and communities in two stages:

There are 6 clearance teams distributed throughout northwestern Syria. So far, they have disposed of more than 23,000 munitions of various types, including more than 21,000 cluster munitions. This achievement has come at a cost however, with 4 volunteers having lost their lives during the course of their work.

During 2020, UXO teams in The White Helmets carried out more than 600 removal operations in which 622 items were disposed of, and survey teams conducted 167 operations, in which 237 contaminated areas were identified, while the teams provided 244 awareness sessions attended by more than 30,000 people,

In 2021 the teams carried out more than 2132 field operations, including 608 removals, in which 683 items were disposed of, and survey teams conducted a survey of 613 villages, in which 408 contaminated areas were identified, while the teams provided 1,107 awareness sessions. It was attended by more than 13,000 people, more than 90% of whom were children.

From the beginning of this year until mid-August, UXO teams intensified their work and conducted more than 780 non-technical surveys in more than 260 contaminated and removed 524 assorted munitions in 449 clearance operations. The teams provided 1,080 awareness sessions on the dangers of mines and remnants of war that benefited 20,000 civilians, including children and farmers.

For the first time in northwestern Syria, female volunteers joined the UXO teams in a new mission to preserve communities and save lives.

Last June, 12 female volunteers in The White Helmets participated in an intensive 12-day training course under the supervision of specialized trainers from the UXO teams. They were trained on non-technical survey with the aim of expanding survey and awareness-raising operations related to the remnants of war that pose a threat to the lives of civilians in northwestern Syria.

The volunteers were trained in the use of survey equipment such as tablets, GPS, and compasses to facilitate the search process and accurately document evidence of UXO contamination. The volunteers will have the ability to carry out non-technical survey tasks and identify areas contaminated with remnants of war, in addition to the ability to educate local communities. The inclusion of women volunteers in the survey teams is key in providing greater access to women and children in local communities, ultimately saving more lives and preventing more disasters.

Despite all the efforts made, large numbers of unexploded ordnance and mines are still present among civilians’ homes, in agricultural lands, and in children’s play areas, as a result of the systematic bombing of the regime and Russia that has continued for years. Unless removed, these will remain potentially explosive for years or even decades to come. The wide-spread presence of these munitions throughout Syria will leave a long-lasting and deadly legacy in the country, even after the war ends. The White Helmets are focused on dealing with this painful reality and preserving the lives of civilians by removing these munitions and educating civilians about their danger. UXO removal is an investment in humanity and in the future, it aids in revitalizing communities, enabling internally displaced people to return to their homes, and allowing children to safely reach their schools and play areas.

To read the full report in English: