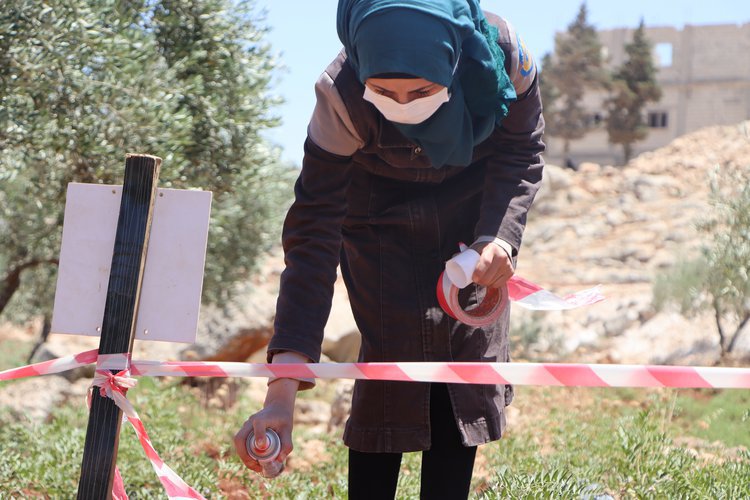 Women volunteers of The White Helmets for the first time have joined the ranks of the UXO teams to carry out a new mission to maintain communities and save lives.

In 2016, Syria Civil Defense UXO teams began their work on destroying remnants of war in a time when no other NGO or party was handling this issue. Syria Civil Defense has specialized teams that deal with specific types of remnants of war. Unexploded Ordnance Disposal is one of the most dangerous and difficult missions. It includes several different activities, including surveying to identify contaminated areas, providing awareness-raising campaigns, and destroying the munitions and unexploded ordnance.

For the first time, women volunteers of The White Helmets have joined the ranks of the UXO teams in NW Syria to carry out a new mission to maintain communities and save lives. On June 23, 12 women volunteers completed an extensive 12 day training course conducted by UXO specialist instructors.

The new volunteers were trained in non-technical surveying with the aim of expanding scanning missions and raising awareness sessions of the dangers of unexploded ordnance that hold long-term deadly impacts on civilians' lives in the northwestern regions of Syria.

The training included the use of survey equipment such as tablets, locators, and compasses to facilitate the search process and reach more accurate results at work. The training focused on introducing the volunteers to the types of explosives and munitions, and distinguishing between air-dropped weapons and guided weapons.

The training also included the most important aspect of the volunteers’ work; community awareness of unexploded ordnance. The women volunteers were educated to give workshops for civilians about unexploded ordnance, how to distinguish between them, and the correct methods of responding to them.

After years of war, unexploded ordnance poses a great danger to the lives of civilians in northwestern Syria. If not dealt with, these remnants of war will have a lasting legacy and will remain a risk in the years to come, even if the war ends.

There are 6 UXO (disposal ) teams distributed in northwestern Syria. They have disposed of more than 23,000 various munitions so far, including more than 21,000 cluster bombs, within their limited capabilities and through difficult working conditions. 4 volunteers have lost their lives working in this high risk field of work.

Over the past years, Syria Civil Defense UXO teams have documented the use of 60 types of various munitions that were used to kill civilians, including 11 types of internationally prohibited cluster bombs, which the regime and its Russian ally did not hesitate to use.

According to the annual report of the International Coalition to Eliminate Cluster Munitions and the International Campaign to Ban Landmines (ICBL-CMC), in 2020 Syria recorded the highest annual death toll in the number of victims killed by landmines and remnants of war.

The report recorded 2,729 casualties in Syria, half of whom were children, out of 7,073 casualties total in the world. Furthermore, the report indicated that the death toll recorded in Syria had the highest recorded number of annual casualties since the observatory began monitoring the death toll from mines in 1999.

The work of UXO teams is imperative in building hope for the future of the Syrian people. This work addresses not only the immediate needs of the Syrian people, but builds towards a long term path to peace, stability, and normalcy in the region. The addition of women volunteers to this important work is key in expanding the mission and operations of UXO removal, while empowering women to be key players in having a positive impact in their communities.