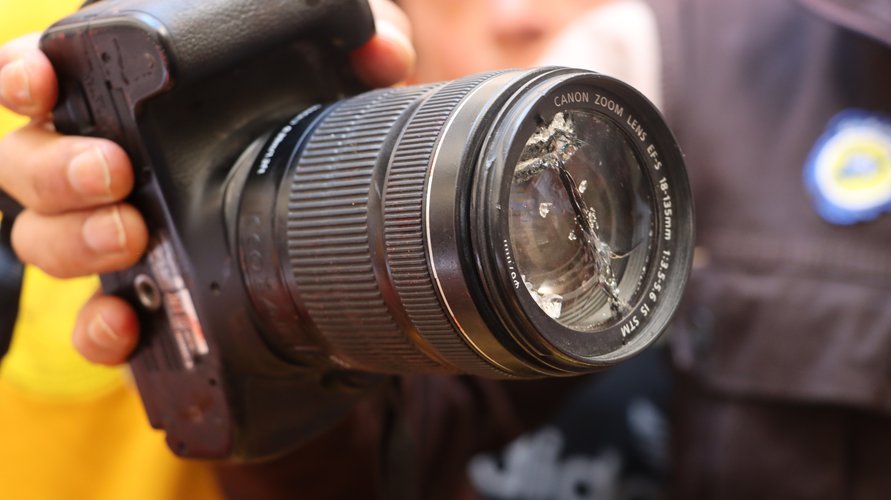 This May 3 marks World Press Freedom Day, a day of reflection on the work and sacrifices of media professionals and the issues of press freedom. This comes at a time when journalists are periodically exposed to tremendous danger and are subjected to a large number of threats and harassment such as kidnapping, killings, and restrictions on their freedom of speech and reporting. They are also attacked directly and on the internet through disinformation campaigns.

This number also includes 5 of The White Helmets media volunteers who were killed by Russian and regime strikes in their line of duty. Every single one of these volunteers worked in the media division, and their role was to document White Helmets operations, including search and rescue operations and responses to attacks on civilians.

White Helmets volunteers don’t just respond to emergency situations, they also play a key role in justice and accountability through the documentation of attacks on civilians by Russia and the Assad regime. They are witnesses to the crimes against humanity being committed. Consequently, volunteers have often been the direct targets of these attacks in an attempt by the aggressors and perpetrators to keep the truth in the dark and hide the reality of the situation in Syria.

In Ukraine today, journalists live the same painful reality. According to a report issued by a press advisory organization to the United Nations, “six journalists have been killed, dozens injured, and two kidnapped since the beginning of the Russo-Ukrainian war.” The press in general also suffers from campaigns of restriction, distortion and media misinformation by Russia, similar to what it has done in Syria over the past years.

On World Press Freedom Day, The White Helmets wishes to highlight the imperative work that journalists undertake and the sacrifices they make in their line of work. Furthermore, we would like to commemorate journalists and media workers who died doing their duty. The importance of this comes at a time when the Syrian tragedy continues and is now repeated in Ukraine, where attacks on journalists, disinformation, and restriction of the freedom of the press are considered among the main reasons for the continuation of wars and the occurrence of more victims, in addition to misleading and building misconceptions of the people.

We would like to remind the world of journalists who lost their lives in the field, stress the need for freedom of the press and the protection of journalists.

As Marie Colvin, the great American journalist who was killed while covering the siege in Homs, Syria stated in reference to her journalistic duties, “My job is to bear witness.” As bearers of witness, journalists shed light on what someone wants to keep in the dark, to challenge postulates from those given or seeking power, to inform the citizens about the happenings of the world, and to empower and inform the informed. In order to uphold their ability to fulfill this honorable goal, it is important that we speak out on the issues that stand against journalists and demand their safety and rights as bearers of witness.