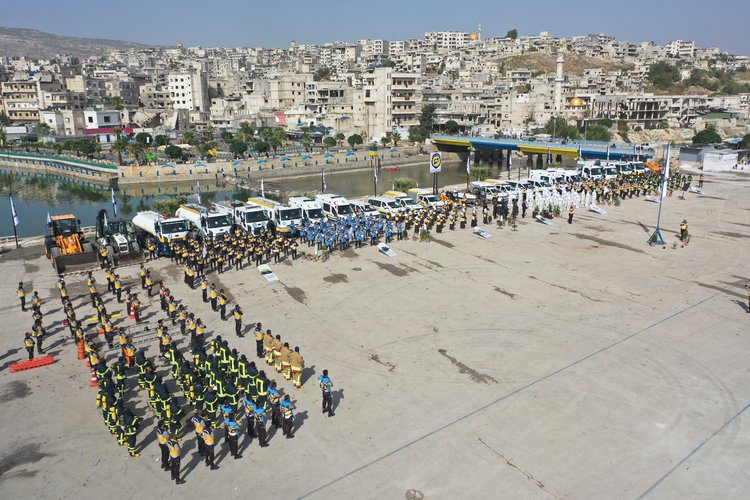 Over the years, the Syrian Civil Defense saved more than 125,000 lives, but lost 297 of its volunteers, most of whom were victims of double attacks by the Assad regime and Russia while rescuing civilians.

Today, Monday October 25, we commemorate “White Helmets Day.” This day coincides with the anniversary of the first founding meeting in the Turkish city of Adana, on October 25, 2014, attended by about 70 volunteer team leaders in Syria who have been working since 2012. On this day, the conferees established a charter of principles for the organization to operate under the umbrella of international humanitarian law to serve the Syrians, and to call it the Syrian Civil Defense with the motto "To save a life is to save all of humanity." Today, however, is not just an ordinary occasion for celebration, but an occasion to reaffirm our determination to continue raising capacities to improve response and develop our skills to carry out the mission of saving civilian lives and helping those in need through war and through peace.

While the work of the White Helmets began with emergency response and rescue motivated by human instinct, our work has expanded over the past years to include a field of operations, including the removal of remnants of war, early recovery, response to epidemics and diseases, and justice and accountability.

Early recovery is a pivotal program of action

Since the start of the peaceful protests in 2011, the Syrian regime has followed a policy of collective punishment with a complete withdrawal of government services. Since the beginning of its establishment, The White Helmets has tried to make-up for the lack of these services beginning first with search and rescue operations and life-saving aid and support.

The White Helmets have also sought to look towards the future beyond immediate response. Though military attacks on civilian populations have not come to a halt and continue to disrupt the lives and stability of civilians, within the past 3 years, they have declined significantly, allowing the beginning of the first steps of early recovery. The White Helmets has provided more than 230,000 service operations during the past three years. These operations vary greatly between sanitation services, restoration of infrastructure and facilities, removal of rubble and roadbeds in camps, and assistance in rehabilitating sewage and water networks. In addition, we’ve taken the first steps in establishing a proper medical infrastructure in response to the Covid-19 pandemic by establishing a factory to produce plastic masks, medical protective suits, oxygen generators, and a medical waste incinerator.

The activities of the early recovery program carried out by The White Helmets aim to address the recovery needs that emerge during the humanitarian response phase, through the use of humanitarian mechanisms that are in line with the principles of development, in a way that enables the population to benefit from humanitarian action to seize development opportunities, build capacity to adapt, and create a sustainable process for the recovery of war-affected communities despite continued military attacks by Russia and the Syrian regime.

Strengthening the role of women

Through 11 years of war, at every moment, Syrian women have been on the front lines fighting battles to preserve societies, protect their families, and save lives under social and economic conditions that may be no less difficult than the pressures of war. The White Helmets believes in enabling women to participate in work and leadership in all areas of life.

During the last meeting of the Foundation’s General Assembly in January 2022, women representation in the General Assembly increased from 10% to approximately 30%. This increase in representation comes in order for there to be a more effective role for female volunteers in line with the foundation’s belief in the capabilities of women in leadership and decision-making levels.

For the first time in northwestern Syria, women volunteers in the White Helmets joined the Unexploded Ordnance (UXO) teams in a new mission to preserve communities and save lives, proving once again that Syrian women at every moment are on the front lines capable of performing in any role.

Last June, 12 female volunteer trainees at The White Helmets participated in an intensive 12-day training course under the supervision of specialized trainers from UXO teams.

The female volunteers were trained in non-technical survey and the use of survey equipment such as tablets, locators, and compasses to facilitate the search process and reach more accurate results at work. The volunteers will have the ability to carry out non-technical survey tasks and identify areas contaminated with remnants of war, in addition to the ability to educate local communities. The inclusion of women volunteers in the survey teams provides The White Helmets with greater access to local communities, especially women and children.

Working towards the future, we continue in our plans to expand the presence of female volunteers, whether through supporting the non-technical survey teams to increase their capabilities, or by joining volunteers in UXO removal.

The International Campaign to Ban Landmines - The Cluster Munition Coalition (ICBL-CMC) is a global network of national and international NGOs bringing together diverse expertise in the areas of human rights, development, refugees, medical and humanitarian relief, with individuals working in more than 100 countries to promote adherence to the treaties that ban landmines and cluster munitions and their implementation.

The campaign (ICBL-CMC) works for a world free of landmines, cluster munitions, and other explosive remnants of war, a world where there are no new victims and where the needs of affected communities and survivors are met and their human rights guaranteed.

The accession aims primarily to shed light on the long-term humanitarian catastrophe related to unexploded ordnance left by the war waged by the Syrian regime and Russia, especially as the campaign issues impartial and independent annual reports reviewing the steps taken by the ratifying countries of the Mine Ban Treaty and the Convention on Cluster Munitions. The campaign also issues reports on the countries that still use mines and cluster munitions, in addition to providing statistics on the number of victims and their global distribution.

Joining the campaign will allow The White Helmets to collaborate with the campaigns affiliated organizations, as the campaign includes a network of national and international NGOs with vast experiences in the fields of human rights, development, refugees, and medical and humanitarian relief, especially since Syria stands as the country with the highest number of victims of cluster munition remnants in the world.

Despite all the efforts made by the UXO teams in the White Helmets and their removal of more than 24,000 various munitions from the remnants of bombing, there are still thousands of munitions and mines in fields and between houses threatening the lives of civilians, especially children. Joining the campaign will contribute greatly to introducing the world to the deadly impact that the Syrian regime and Russia deliberately left, and will contribute to focusing more efforts on helping Syrians get rid of this heavy legacy.

Raising the capabilities of ambulance teams

The Syrian Civil Defense is completing a training plan for ambulance volunteers on practical and theoretical skills where volunteers who complete the training will receive an academic diploma. This diploma is part of the program to raise the capacity of ambulance teams and increase the number of volunteers who have advanced first aid training.

100 volunteers (69 male and 31 female volunteers) will participate in the diploma program. The program includes two theoretical and practical stages, each stage lasting about three months, with 735 hours of theoretical and practical training for each trainee. The ambulance diploma aims to prepare qualified graduates with both scientific and practical knowledge, giving them the ability to provide first aid and health care in the field of ambulance and emergency, and to qualify them to carry out emergency medical procedures.

Ambulance operations are an important part of the work of The White Helmets, especially in light of the significant shortage of hospitals, medical facilities and medical staff, all of which are often the targets of Syrian regime and Russiam bombing. Since the beginning of 2022, The White Helmets have performed more than 60,000 ambulance and transportation operations.

At the beginning of this year, The White Helmets participated in the Universal Periodic Review of Syria at the United Nations Human Rights Council, as part of civil society organizations, and submitted a report with the aim of shedding light on human rights violations in Syria, calling on all countries participating in the review to condemn the targeting of civilians and attacks on medical and humanitarian workers.

The Universal Periodic Review puts the human rights record of each UN member state under scrutiny every five years, but requires the active participation of civil society to achieve the best results by strengthening the capacity of civil society to engage in global spaces to advocate for freedom of expression.

The report also touched on the role of the Syrian regime in impeding the access of humanitarian aid to local communities. These practices included politicizing the delivery of humanitarian aid and imposing restrictions and obstacles on access to it, in parallel with the policy of starvation and siege against population centers living in areas outside of regime control, which led to the starvation of hundreds of thousands of people.

The report concluded with a number of recommendations, most notably the demand to strengthen a permanent ceasefire in northwest Syria, stop the systematic targeting of medical and health facilities, stop using internationally prohibited weapons such as cluster bombs and barrel bombs, and open an investigating the systematic attacks in order the prosecute the parties involved in war crimes and crimes against humanity.

Despite the key humanitarian role The White Helmets has played, the war in Syria continues. Syria is barely in the first stage of early recovery. Responding and helping civilians and providing basic services to civilians is among some of The White Helmets greatest duties. As we continue to provide service to civilians, we look towards the future in rebuilding a country devastated by war.