Al-Bab is bleeding... 15 dead and more than 30 wounded in a horrific massacre 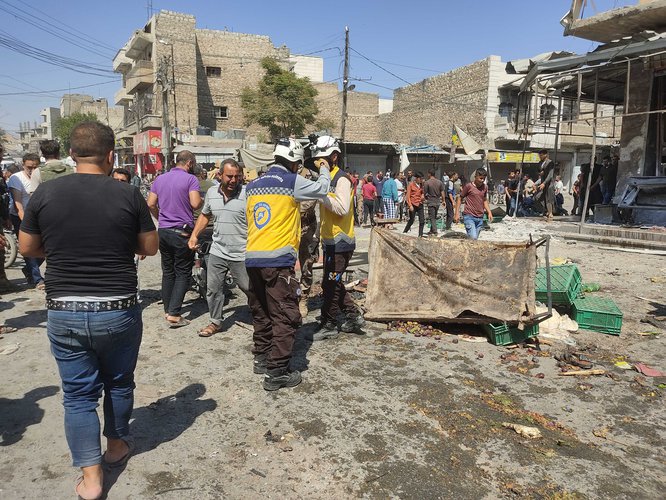 The escalation and terrorist attacks threaten the stability of civilians at any time in an area has become the last refuge for thousands of families displaced by the regime forces and Russia.

The city of Al-Bab in the eastern countryside of Aleppo witnessed a serious military escalation today, Friday, August 19, with terrorist attacks originating from areas controlled by the regime forces and the Syrian Democratic Forces that targeted the city with missiles, which led to a massacre with causalties of more than 44 civilians, either dead or wounded.

15 civilians, including 5 children, were killed, and more than 30 others were wounded, including at least 11 children. There are critical injuries, which may raise the number of casualties. The missile shelling originated from areas controlled by the regime forces and the Syrian Democratic Forces, targeting the popular market, a school and civilian homes in the city of Al-Bab in the eastern countryside of Aleppo.

In addition to the victims, the bombing caused significant damage to civilian properties and homes, and a guard room was damaged.

The city of Al-Bab was subjected to a similar bombardment last February 2, which resulted in a massacre that killed 8 civilians, and wounded 24 others, including 3 children and 4 women. The bombing targeted the popular market and civilian homes in the city at that time.

The city of Al-Bab is one of the largest cities in the eastern countryside of Aleppo, and it has become a last resort for a large number of displaced people from various Syrian regions, especially after the waves of displacement caused by the attacks of the regime forces and Russia in 2018 and 2019. The city of Al-Bab is constantly exposed to shelling and attacks with explosive devices or car bombs.

Last year, Syrian Civil Defense teams responded to 64 artillery and missile attacks on the city, in addition to improvised explosive devices and car bombs. These attacks killed 24 civilians and wounded 82, including 44 women, 4 children and a volunteer from the Syrian Civil Defense.

The northern countryside of Aleppo has witnessed a continuous escalation of terrorist attacks since last July, as a civilian was killed and two others, including a woman, were wounded, by missile strikes coming from areas controlled by the regime forces and the Syrian Democratic Forces, on Sunday, July 24, targeting a camp for the displaced, "Kuwait al-Rahma" in the village of Qibar in Afrin countryside, north of Aleppo, and 10 civilians, including 5 women and a child, were injured in similar attacks on August 3 and August 4 targeting residential neighborhoods in the center of the city of Azaz, north of Aleppo. It is the Syrian Democratic Forces and the regime forces.

Since the beginning of the current year 2022 until yesterday, Thursday, August 18, the Syrian Civil Defense teams responded to 376 attacks on civilians in northwestern Syria by the regime forces, Russia and the militias loyal to them, which led to the killing of 76 civilians, including 27 children and 11 women, and the injury of 174 civilians, including 62 children and 24 a woman.

These terrorist attacks, which target markets, vital areas, schools and residential neighborhoods, threaten the stability of civilians in the region, and it is a systematic policy aimed at spreading terror among the safe civilians and preventing them from living their normal lives. The international community must put an end to these deadly terrorist attacks and stand up to the perpetrators of these systematic crimes against the Syrians. and hold them accountable.