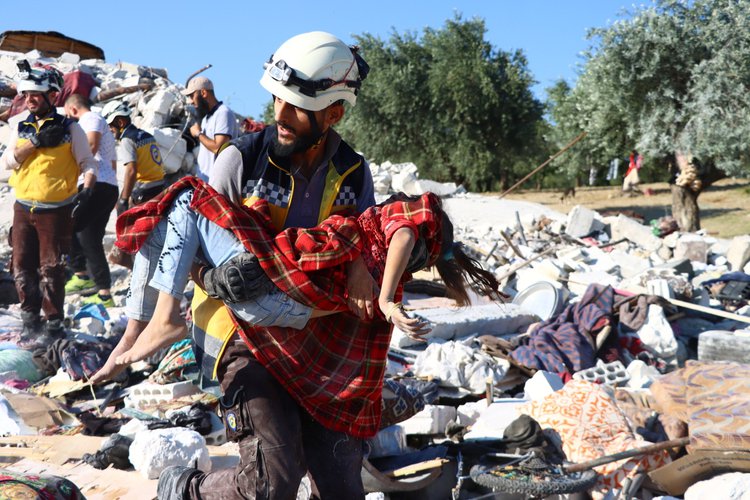 Russian warplanes committed a massacre in Idlib countryside today, Friday, July 22, killing and wounding 20 civilians, most of whom were children, in conjunction with artillery shelling by the regime forces targeting Idlib countryside and Al-Ghab Plain. These attacks undermine hope for stability in the region, leaving civilians living life in a constant state of tension and suffering.

Seven civilians, including 4 children from one family, were killed, and 13 others, including 8 children, were wounded, in a massacre perpetrated by Russian warplanes today by targeting a poultry farm inhabited by displaced persons and civilian homes on the outskirts of Al-Jadida village in the western countryside of Idlib.

In conjunction with the Russian aerial bombardment of the village of Al-Jadida, the villages of Hmeimat, Shaghouret and Al-Mozara in the southern countryside of Idlib were also subjected to artillery shelling by the regime forces, which targeted civilian homes, injuring a civilian in the village of Al-Mozara and damaging residential buildings.

Yesterday, Thursday, July 21, the regime forces and Russia targeted civilian homes in the town of Ebnabh, near the city of Ariha, south of Idlib, and caused material damage but no injuries.

The Russian warplanes had committed a similar massacre in the first minutes of the new year 2022, when air strikes were launched targeting homes and tents for displaced people in the White Nahr area near Jisr al-Shughur, west of Idlib, which led to the deaths of two children and a woman and the wounding of 10 civilians, including 6 children.

Yet another atrocity committed passes without international accountability. The displaced, who continue to flee from one scene of death only to find themselves in another, are let down by the world. The terrorist crimes committed by the Russian warplanes today in the village of Al-Jadida, west of Idlib, is a continuation of the policy of killing, displacement, and criminality practiced by Russia in its support of the Assad regime in murdering Syrians. It is proof that Russia can never be the bringer of peace and safety to the Syrians as it so claims to be . The international community must put an end to Russian terrorism.