Fires in northwest Syria... responding to 30 fires in the first week of 2023 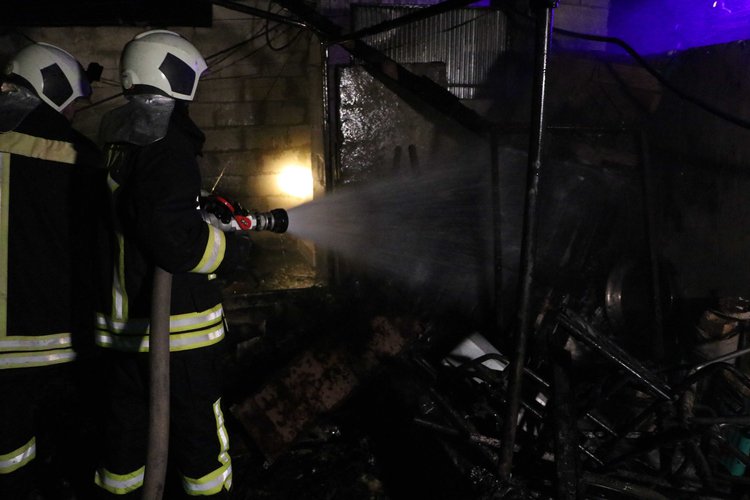 During the first week of this year, our teams responded to 30 fires in the northwest region of Syria. These fires resulted in the death of a child and the injury of six civilians, including two children and two women, who sustained burns of varying severity. The fires also caused significant damage to property. Most of these fires were caused by heaters and other heating devices in homes and camps.

As temperatures drop during the winter season, the frequency of fires often increases, particularly in homes and displacement camps where people rely on heating methods. These fires can be deadly for civilians and cause serious injuries, as well as significant damage to property. The causes of these fires can vary, but they often result from the use of heating devices that run on fuel, plastic materials, or electricity. In northwestern Syria, incidents involving heating devices that use water and domestic gas have resulted in fatalities and injuries from suffocation this winter.

Since the start of this year 2023, our teams have responded to 30 fires in the northwestern regions of Syria, which have resulted in the death of one child and the injury of six civilians, including two children and two women. These fires occurred in a variety of locations, including 16 in civilian homes, two in camps, and 11 in fuel stations, shops, and warehouses.

The frequent occurrence of fires in the northwestern regions of Syria adds to the suffering of civilians, particularly in camps, and poses a threat to their lives. This danger is compounded by the ongoing bombing by regime forces, Russia, and their allies, as well as the risks of disease, epidemics, flooding, heavy rain, cold, and snow during the winter season. These challenges only serve to heighten the already dire situation faced by many Syrians in the region.

The dire living conditions and prolonged conflict in the northwestern regions of Syria have forced civilians to rely on cheaper, yet potentially dangerous, heating methods during the winter. The economic realities and poor supply of electricity, solar energy, and batteries make it difficult for people to afford safer options. As a result, fires caused by the use of poorly processed fuel, plastic materials, coal, and other hazardous materials, as well as the risks of electrical issues and the use of domestic gas for heating and hot water in poorly ventilated spaces, are all too common. The lack of safety measures and awareness also contribute significantly to the frequency of these accidents.

During the year 2022, the Syrian Civil Defense teams responded to 1,929 fires in the northwest region of the country. These fires occurred in a variety of locations, including 593 in civilian homes, 185 in camps, and 141 in fuel stations (primitive refineries and fuel sales stations). The remaining fires took place in forests, agricultural fields, schools, markets, and public facilities.

The White Helmets have been working to reduce the frequency and impact of fires through continuous awareness campaigns that promote safety and security, as well as correct heating practices. These efforts include training sessions for civilians in the northwest region of Syria to teach them how to control fires at their inception, including those caused by gas cylinders and flammable liquids. Participants in these sessions, including workers, teachers, and protection officials, receive theoretical instruction on the types and causes of fires, as well as practical training on the use of manual extinguishers and proper evacuation procedures. By empowering individuals to take action in the event of a fire, the White Helmets hope to decrease the number of fires and the harm they cause to people and property.