Paving the Path for a Better Future: SCD Services on the Roads of IDP Camps 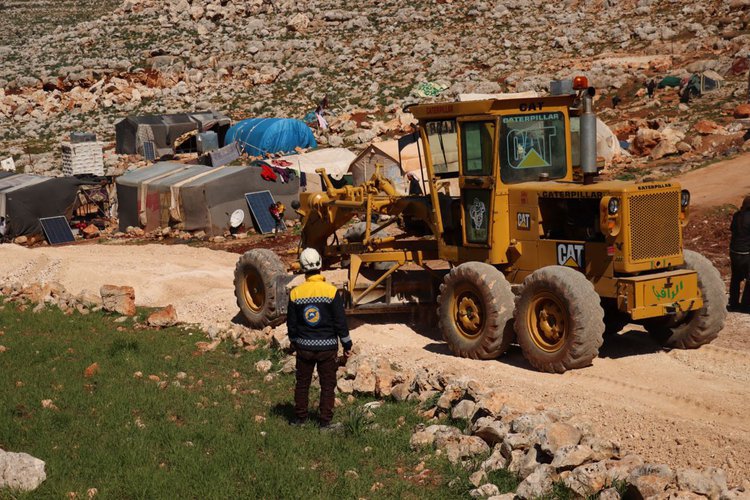 On Tuesday, March 15, the Syria Civil Defense started a service project to lay gravel roads in 3 camps as part of the winter response plan for the camps in northwestern Syria with the aim of improving civilians’ access to aid and basic facilities necessary for their lives

Every winter, catastrophe is repeated in the camps located in Northern Syria, and the displaced residing in the camps suffer as a result of the weak and fragile infrastructure and its inability to cope with weather conditions. More than 1.5 million people, displaced by the Assad regime and its Russian ally, live in camps on the border strip in the countryside of Idlib and Aleppo. These camps lack basic infrastructure such as roads, water and sewage networks.

Syria Civil Defense has been working in these areas to provide assistance in order to bridge the large gap in the service needs of those camps, especially those that lack all the necessities of a healthy life.

The effects of the recent extreme weather conditions reflect the continuation of the tragic reality in the camps in the absence of effective solutions to the situation of the displaced.

During this winter, NW has been exposed to harsh snow and rain storms, damaging hundreds of camps and displacing thousands of families. From the beginning of this year until the end of February, our teams responded to more than 300 camps in which more than 2,800 tents were partially damaged and 1,320 tents that were completely destroyed, More than 3,500 families were living in those tents, completely cut off to access or aid during the storms due to the poor road conditions.

According to a study prepared by the Syria Civil Defense in late 2021, the basic needs of the displaced in 192 camps in northwestern Syria are not being met.

The same study also showed that despite the intervention of humanitarian actors within the camps sector, there is a severe lack in the absence of durable solutions. As a result, White Helmets volunteers are obliged to emergency interventions annually to prevent the occurrence of humanitarian disasters.

On Tuesday, March 15, the Syria Civil Defense started a service project to lay gravel roads in 3 camps as part of the winter response plan for the camps in northwestern Syria with the aim of improving civilians’ access to aid and basic facilities necessary for their lives, such as allowing students to go to their schools, as the surroundings of these camps are untrekkable.

The project targeted two areas, the first is the "Shamna Gathering" camp in the vicinity of Armanaz city in the northwestern Idlib countryside, the second is in "Al-Furqan" camp, west of Azaz city, and "Yazibagh - Sector IV" camp north of the city. The camps were selected after conducting a needs assessment by the Syria Civil Defense.

The project included carrying out various services of work such as digging, leveling and compacting the foundational floors of the targeted roads, supplying, spreading and stacking gravel, and the implementation of rain grills within the road. In addition, SCD volunteers cleared roads, opened water corridors to drain rainwater, and raised earth mounds to keep torrents away from the camps. The number of beneficiaries from the camps is estimated to be at least 6,000 people.

Last year, our teams also implemented service projects laying gravel roads in 30 camps. The camps were selected after conducting a needs assessment by the Syria Civil Defense for 626 camps distributed over three main areas, the first in Azaz and Jarabulus in the northern and eastern Aleppo countryside (9) camps, and the second area in The northern countryside of Idlib and western Aleppo (14) camps, and the third area of ​​Jisr al-Shughur camps, west of Idlib, (7) camps.

Ultimately, the conditions of the displaced cannot be resolved by simply providing services to the camps, despite the great importance of such services, because their suffering requires long term solutions. The Syrian people have the right to return to their homes. This is the most important of the rights they have been denied.