US Ambassador to the United Nations, Linda Thomas-Greenfield Met the White Helmets Near Bab Al-Hawa Crossing on the Turkish-Syrian Border 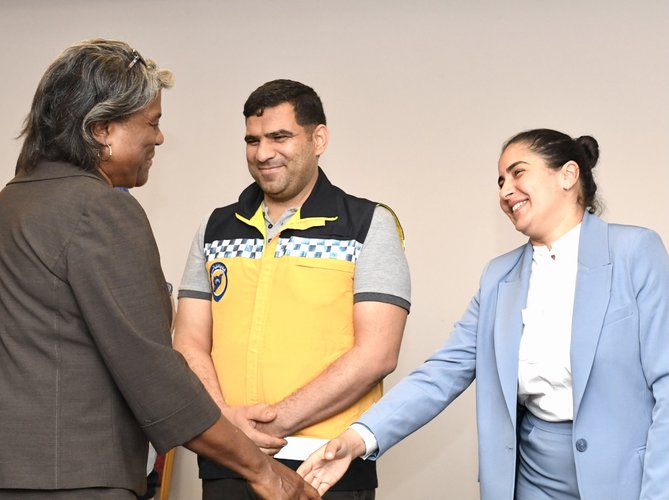 Millions of people in Syria, including millions of Internally Displaced People (IDPs), require humanitarian assistance and rely on the UN’s support. There is currently no other option for the delivery of humanitarian aid on a large scale except for the Bab al-Hawa crossing to remain open.

The White Helmets today met with US Ambassador to the United Nations, Linda Thomas-Greenfield, at Bab al-Hawa, the only remaining humanitarian border crossing between Turkey and Syria. During her visit, Greenfield affirmed US support to extend the mandate of the mechanism to deliver humanitarian aid through the Turkish-Syrian border.

Humanitarian access has been seriously restricted by Russia through the UNSC. The Bab al-Hawa border is the last entry point for UN humanitarian aid from outside of Syria. It is mandated by UN Security Council Resolution 2585. This resolution is renewed annually and is under threat of veto by Russia in July. Russia has vetoed the renewal of this resolution three times since 2019, and there is no guarantee that the resolution will be renewed for another year.

Millions of people in Syria, including millions of Internally Displaced People (IDPs), require humanitarian assistance and rely on the UN’s support. There is currently no other option for the delivery of humanitarian aid on a large scale except for the Bab al-Hawa crossing to remain open. There are no viable alternatives. Cross-line aid coming through the border from regime-controlled areas is deeply flawed and can never replace the scale and legitimacy of cross-border operations. In the long term, the localisation of humanitarian aid is essential to reduce reliance on the cross-border resolution.

During the meeting, the two parties discussed the humanitarian situation, the protection of civilians in Syria, the implementation of Resolution 2254, and the danger of closing the Bab al-Hawa crossing, a lifeline for more than 4 million civilians in Syria, after Russia's intention to veto the extension of United Nations supplies sent across the border.

There was also discussions on justice and accountability concerning the crimes committed by the Assad regime against the civilian population, such as its use of chemical weapons, forced displacement, targeting of civilians and civilian infrastructure, enforced disappearance, arbitrary arrest and killing under torture. The US ambassador reiterated her country's firm position on the Syrian cause and support for the Syrian people in their movement to demand change, and affirmed the commitment of her country to hold the Assad regime accountable for its crimes, and to seek a political solution in accordance with Security Council Resolution 2254.

The US ambassador indicated the importance of continuing life-saving support, including support for the medical sectors, maintaining the safety of civilians, securing health care, and protecting the future of children, as it guarantees the future of Syria, and affirmed the commitment of her country to hold the Assad regime accountable for its crimes, and seek a political solution in accordance with Security Council Resolution 2254

Raed al Saleh, Head of the White Helmets said: “Humanitarian need has never been higher in Syria. There is no plan B to help more than 4 million people in need. Humanitarian assistance should not be a political question. Russia has manipulated the international community for years to support the Assad regime and to politicize and withhold aid to the most vulnerable people in need. Aid should not be held hostage at the UN Security Council.

The Assad regime has grossly mishandled humanitarian aid, discriminating in their distribution according to the loyalty of local communities, yet continues to presents itself as an honest party. Allowing the termination of the mechanism for bringing aid across the border into Syria, in favor of bringing it across the lines of conflict, is a reward for the Assad regime for its corruption and exploitation of humanitarian aid despite previous experiences in this context and its use as a weapon of starvation and siege.’’

The head of The White Helmets called on the United States and the international community to not abandon the Syrian people and leave them hostage to Russian blackmail in the Security Council, and to take all possible measures to ensure that humanitarian aid reaches the Syrians.

A women volunteer from the Syria Civil Defence delivered a message to the US Ambassador during the meeting on behalf of all women volunteers at White Helmets to express their gratitude to Ambassador Greenfield for the message she sent to them on International Women’s Day, and for her efforts in bringing peace and empowering women. The women volunteers emphasized the dire need to extend the mechanism of delivering humanitarian aid to Syria in order to avoid a humanitarian catastrophe and save innocent lives. They also called on the US to hold the Assad regime and Russia accountable for their crimes against the Syrians.

The humanitarian impact of a sudden UN withdrawal caused by the non-renewal of resolution 2585 would be catastrophic. The White Helmets calls on members of the UN Security Council to take all possible measures to guarantee humanitarian access to those in need.