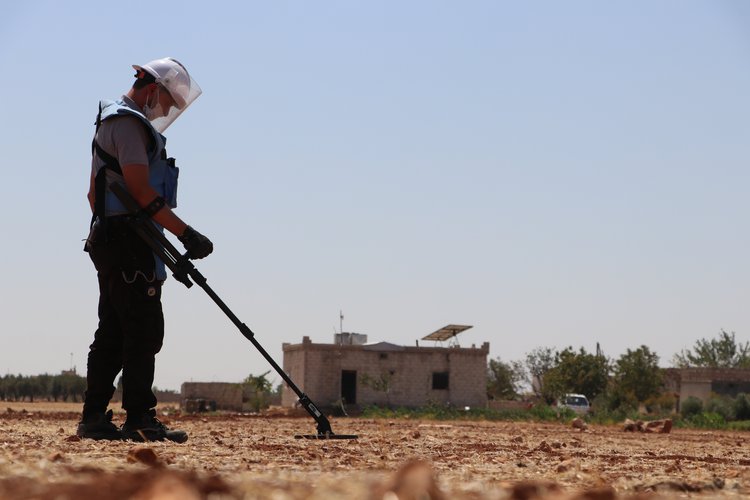 In 2021, Syria recorded the largest number of victims of cluster munition remnants in the world, with 37 victims

The White Helmets has officially joined the International Campaign to Ban Landmines and Cluster Munition Coalition (ICBL-CMC) as part of its efforts through its work in the disposal of remnants of war in Syria and to bring awareness to the deadly long-term legacy that remains from the war waged on Syrians and the importance to responding to these remnants in order to protect civilians from their deadly impact.

The International Campaign to Ban Landmines and Cluster Munition Coalition (ICBL-CMC) is a global network of national and international NGOs bringing together diverse expertise in the areas of human rights, development, refugee, medical and humanitarian relief, and works across more than 100 countries to promote adherence to treaties concerning landmines and cluster munition.

The campaign (ICBL-CMC) works to build a world free of landmines, cluster munitions, and other explosive remnants of war, a world where no one is victim to landmines and cluster munition, where the needs of affected communities and survivors are met, and where their human rights are guaranteed.

The Landmine and Cluster Munition Monitor support the work of the ICBL-CMC by providing the latest and most comprehensive research on cluster munition and landmines in the world as well as the extent to which countries are in compliance to the Mine Ban Convention and International Treaty Banning Cluster Munitions, in addition to evaluating the international community’s response to the problems caused by landmines, cluster munitions and explosive remnants of war through neutral and independent annual reports. The reports review the steps taken by the countries that signed the Mine Ban Convention and the International Treaty Banning Cluster Munitions, as well as the countries that still use mines and cluster munitions. The reports also review the statistics of victims and their distribution throughout the world.

The Syrian Civil Defense participated in the 10th meeting of the States Parties to the 2008 Convention on Cluster Munitions, which was held at the United Nations Headquarters in Geneva from August 30 to September 2 of this year. During the conference, the 2022 report of the Cluster Munition Monitor was discussed.

The report discussed the efforts of The White Helmets in survey and removal operations in northwestern Syria, and about the risks that unexploded ordnance (UXO) teams face as a volunteer was injured in 2021 while working in munition disposal. The report also discussed the addition of female volunteers in the non-technical survey teams in 2022.

UXO work includes several different activities, including surveying to identify contaminated areas, awareness-raising operations, and final disposal of ordinances. The White Helmets began their UXO operations in 2016 to combat munition remnants that threaten the lives of thousands of civilians daily in the absence of parties working in this field. We have so far managed to dispose of more than 24,000 various munitions, including more than 21,000 cluster bombs, within very limited capabilities and conditions. UXO work is one of the most dangerous and difficult services The White Helmets provide. It has claimed the lives of 4 of our volunteers.

Over the past years, the munitions teams in the Syrian Civil Defense have documented the use of more than 60 types of various munitions by the Assad regime and Russia on civilians, including 11 types of internationally prohibited cluster bombs. The consequences of these weapons are long term and far reaching, as their left over unexploded remnants remain as time waiting to kill at any moment.