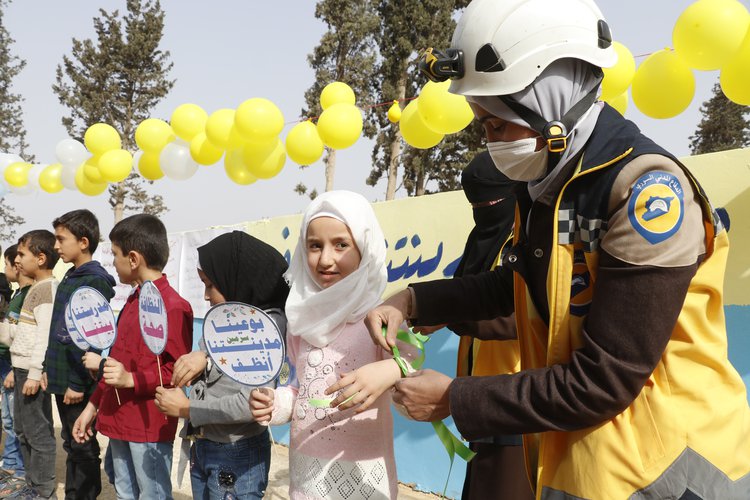 Early this month, The White Helmets awareness teams launched an awareness initiative in the city of Sarmin, east of Idlib, aimed at promoting awareness and action towards health, cleanliness, and the environment in order to build a more sustainable society.

The initiative focused on public hygiene and attention to the cleanliness of the environment, residential neighborhoods, and streets of the city, which have suffered greatly after years of bombardment by Russia and the Syrian regime. These attacks have caused considerable damage and destruction to infrastructure and public facilities. The teams held a volunteer day with the participation of civilians and local residents to clean the city's neighborhoods and streets, making the city a more beautiful place to live and creating a community  incentive for volunteering and awareness of the importance of community action.

During the month, 253 awareness sessions were held in the city targeting school students, humanitarian workers, and local actors and residents with more than 6000 beneficiaries.

Throughout the sessions, we discussed problems and solutions on improving the city’s aesthetic and caring of public and environmental cleanliness, with the aim of preventing the spread of diseases and epidemics, especially cholera.

The teams also held several activities for school children. As the future of Syria, children have the power to shape their communities by applying what they’ve learned and sharing it to their families and neighbors while also spreading awareness messages through social media sites.

The initiative was accompanied by a service campaign, during which volunteers cleaned the city's neighborhoods and streets, removing rubble and dirt from the squares, cleaning and sanitizing schools and water tanks, and restoring roads and pedestrian sidewalks.

The initiative concluded with a “volunteer day” in which a number of city residents, school children, and volunteers participated. The volunteer day included cleaning the city's neighborhoods, washing streets and sidewalks, and removing dirt and rubble.

Our teams continuously launch service initiatives in northwestern Syria to improve the services and infrastructure, especially in areas destroyed by the bombing from the Syrian regime and its Russian ally. Our teams also seek to involve local actors and students in these initiatives so as to positively cultivate volunteer values and values of hygiene and environmental awareness and preservation. Through these activities, we can positively impact our communities by encouraging a sense of individual initiative towards one's community.