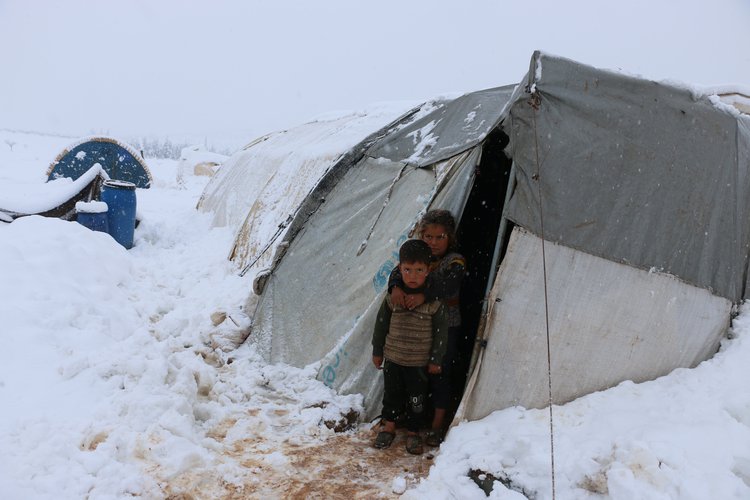 In one week, the northwestern regions of Syria were subjected to two extreme weather events. The volunteers of The White Helmets responded to the affected camps and villages during these especially severe weather conditions, conducting operations in 376 villages and 321 camps in the month of January 2022.

The displaced Syrians in northwestern Syria suffer every winter from extremely difficult living conditions, as many incidents are repeated annually including deaths and injuries among the displaced, destruction of tents and camps from snow, rain, and flooding, and the obstruction of access to humanitarian aid due to the road closures and rough weather conditions. This year in particular, the displaced find these already difficult living circumstances further exacerbated by the recent scarcity in humanitarian aid and unusually severe weather conditions coinciding with the spread of the Coronavirus.

In one week, the northwestern regions of Syria were subjected to two extreme weather events. The volunteers of The White Helmets (Syria Civil Defense) played an important role as first responders to the humanitarian crises within the affected camps and villages during these especially severe weather conditions, conducting operations in 376 villages and 321 camps in the month of January 2022.

The first snow and rainstorm lasted for two days beginning on January 18th. The storm caused complete road closures, surrounding the camps in the northern countryside of Aleppo in snow and flooding those in the northern countryside of Idlib. The white helmets teams documented the damage of more than 72 camps. 19,000 tents were partially damaged, while 920 tents were completely destroyed. These tents were inhabited by more than 2,250 families.

The second snowstorm hit NW Syria starting at midnight on January 23, trapping IDP camps, especially in the Afrin area, resulting in road closures of major access points. 850 tents were partially damaged by the snowstorm while 400 tents were completely destroyed. These tents hosted more than 1200 families.

The volunteers doubled their efforts during the second storm as they worked around the clock during the extreme weather conditions in order to clear up the road closures in various villages and towns, in particular, the Raju district north of Aleppo. The volunteers carried out 1,751 service operations on the roads. This included 466 operations in 212 residential communities in order to clear out roads blocked by the snow, including 243 operations alone in Afrin, the area most affected by the snowstorm. The teams managed to open most of the closed roads to facilitate traffic and return access to the camps trapped by the snow.

The White Helmets response in camps and on roads in Northwest Syria January 2022 Download 4.2 MB