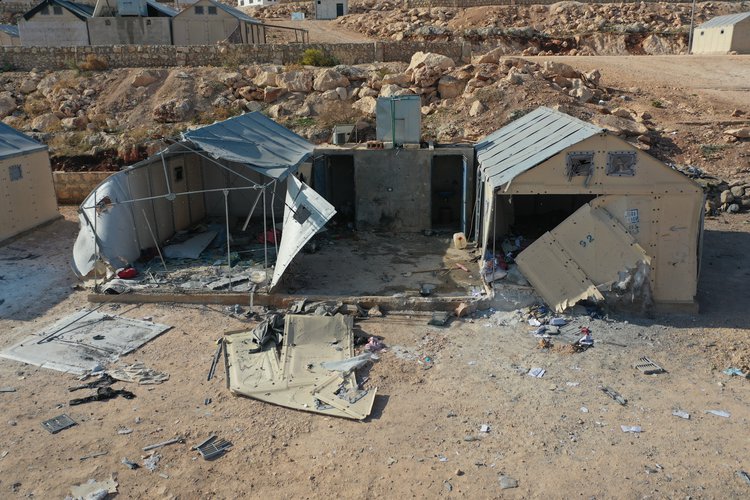 The White Helmets urge the international community to ensure that Russia and the Assad regime stop systematically targeting the civilian population, in light of their lack of commitment to any framework that supports a process for a political solution.

The Assad regime and its Russian ally committed a massacre, this morning, Sunday, November 6, by targeting camps for the forcibly displaced near the villages of Kafr Jales, Morin, and Wadi Hajj Khaled, west of Idlib city, with surface-to-surface missiles (220mm 9M27-K Uragan) loaded with internationally prohibited cluster bombs (9N235). 9 civilians were killed, including 3 children and a woman, and about 70 others were injured.

The terrorist attack launched by the regime forces and Russia on the camps this morning was a deliberate, calculated, and premeditated attack, confirmed by what was published yesterday evening, Saturday, November 5, by Sputnik, the Russian state-owned news agency, when Oleg Egorov, deputy head of the Russian Center for Reconciliation in Syria, accused the White Helmets of preparing to launch attacks targeting the Kafr Jales camps and other camps in the Idlib countryside.

Over the years, Russia has pursued a policy of systematic media disinformation campaigns in its war against the Syrians. These campaigns often happen before any Russian and regime attack, claiming that other parties are preparing for attacks, in order to divert public attention and cause confusion.

The White Helmets consider today’s acts by Russia and the Assad regime a double crime against humanity by both launching systematic attacks on neutral camps while also using cluster munitions banned and prohibited under international humanitarian law. The absence of any firm international stance against these attacks further enables Russia and the Assad regime by providing them the green light to continue their terrorist acts in other regions of the world. We see today the price of international silence and inaction paid by the innocent in Syria and in Ukraine.

The White Helmets urge the international community to ensure that Russia and the Assad regime stop systematically targeting the civilian population, in light of their lack of commitment to any framework that supports a process for a political solution.

The biggest concern for the Syrian people is putting and end to the terrorist attacks that continue to murder their children and pursue the displaced across the country. However it is difficult to negotiate and make demands from a military machine that knows nothing but killing. It is also difficult to ask for help from an international community governed by political balances and regional interests away from human rights tracks.

A statement from The White Helmets on the Assad regime and Russia’s massacre on IDP camps in Idlib with internationally prohibited weapons Download 1.3 MB