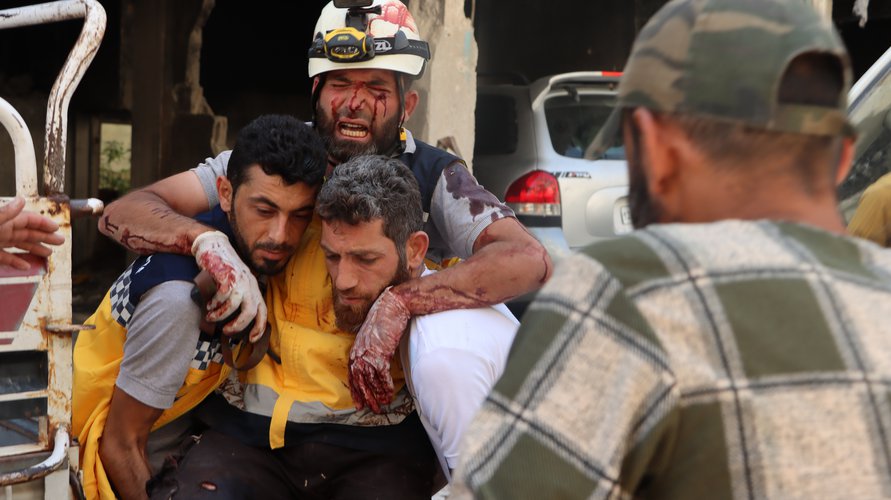 This weapon is deadly: while only 4% of the attacks documented used Krasnopol, they resulted in one fifth of all civilian deaths caused by military attacks in 2021.

In 2021, The White Helmets (Syria Civil Defense) witnessed a new trend in attacks on civilians in Northwest Syria.

Over the past decade, the Assad regime and Russia’s forces have relied on a scorched-earth policy in Syria, employing a huge arsenal of artillery, missile weapons, and airstrikes that affect a wide area, or using weapons that are indiscriminate and scatter and disperse over a wide area such as internationally prohibited cluster bombs, chemical weapons, and phosphorus munitions.

However, in March of 2021, artillery and missile attacks from the Assad regime and Russia’s forces began to take on a new pattern with the introduction of a new, lethal, highly destructive and highly precise weapon. This weapon is known as the laser-guided and Russian-made Krasnopol weapon.

The White Helmets issued a report that monitors the Krasnopol attacks. The report provides information on the weapon, its use, and its impact on civilians and civilian infrastructure.

The Krasnopol is deadly: while only 4% of the attacks documented used Krasnopol, they resulted in one fifth of all civilian deaths caused by military attacks in 2021.

The report documented 63 attacks using this type of projectile. The attacks targeted 43 houses, and 11 attacks on agricultural fields. The attacks also targeted the camps of the displaced, the Al-Atareb Hospital, west of Aleppo, the Maraian Medical Point, south of Idlib, and the White Helmets center in the town of Qastoun in the Al-Ghab Plain. The attacks resulted in the deaths of 70 people, including 29 children, and the injury of more than a hundred others, including 23 children. Among the victims were two volunteers in the White Helmets

The first incident of the use of Krasnopol in NW Syria documented by our teams was the targeting of the Atarib city hospital west of Aleppo on March 21st. This attack resulted in the death of 7 civilians, including a child and a woman, and the injury of 15 others, including 9 hospital staff (5 doctors, 3 nurses, and a technician). The hospital, run by the Syrian American Medical Society (SAMS), shared its coordinates with the United Nations through the coordinate exchange mechanism in order to minimize attacks on medical facilities in the midst of a conflict. These coordinates were shared by the UN with all parties involved in Syria, including Russia. Despite this, the hospital was still targeted.

The use of the Krasnopol is significant because it is the first time we have witnessed the use of a weapon that clearly indicates the intent to cause specific civilian casualties. The fact that a high-precision weapon failed to achieve its supposed purpose of harming armed militants suggests that these weapons were used to directly target civilians. These weapons display a blatant disregard to human life, but continue as a result of the lack of accountability of the violations taking place in Syria

Consequently, we now witness the same scenario being repeated in Ukraine, as reports of Russia’s use of Krasnopol in Ukraine surface and as we continue to see civilians, aid work, public facilities and hospitals targeted in Ukraine. The use of laser-guided artillery weapons against civilians is a concerning new trend for 2021. If accountability is not taken, these highly advanced and destructive weapons will continue their high toll on innocent civilian lives.