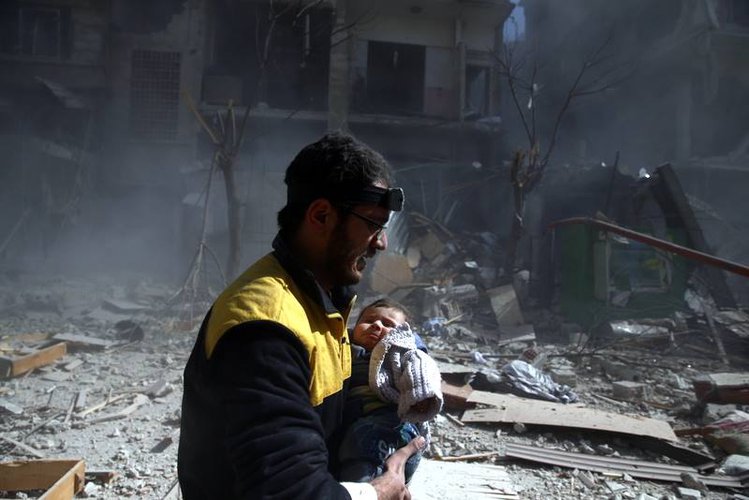 On the contrary, the Syrian Regime continued their operations and have again used poison gas shortly following the Inter-Agency Humanitarian Convoy entering Ghouta, causing the death of some 30 civilians in suffocation.

On 24 February 2018, the UN Security Council adopted Resolution 2401, which requires all parties to the Syrian conflict to immediately cease hostilities for at least 30 consecutive days throughout Syria to enable the delivery of humanitarian assistance and evacuation of the critically sick and wounded. But since then, almost no progress has been made on the ground to implement this resolution.

On the contrary, the Syrian Regime continued their operations and have again used poison gas shortly following the Inter-Agency Humanitarian Convoy entering Ghouta, causing the death of some 30 civilians in suffocation.

The Inter-Agency Humanitarian Convoy left Ghouta before completing the delivery of life-saving humanitarian supplies which has a catastrophic impact on the people in need.

More than 42 civilians have been killed on the same day due to increased bombardment. Hospitals and SCD centers were heavily targeted denying civilians access to emergency rescue and health care while causing a freeze of operations.

SCD demands protection for all aid and rescue workers.

To date, more than 661 civilians were killed and 2373 injured since the beginning of the attacks in 19th Feb 2018. These actions have affected other areas causing massive displacements due to fear of a repeated genocide, especially Masraba city who is also witnessing a large-scale military operation.

SCD understand the United Nations efforts on 5th March as a merely shy attempt and is not considered enough to help the civilians in Ghouta.

The Syrian Civil Defence call on all parties and the United Nations to take all necessary measures to ensure the decrease of violence, the protection of the Syrian people by respecting International Humanitarian Law, and urgent humanitarian access all over Syria and particularly in Ghouta.

SCD stresses the urgency of this matter to prevent further loss of lives. Aggression against aid and rescue workers along with civilians is considered a war crime.