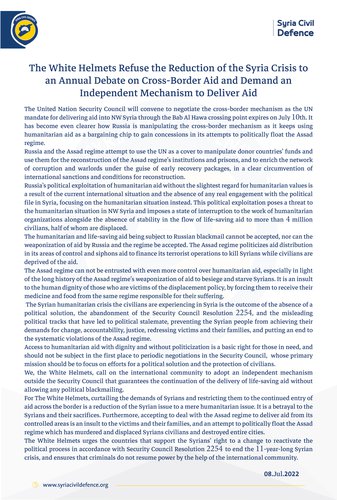 The Syrian humanitarian crisis the civilians are experiencing in Syria is the outcome of the absence of a political solution.

The United Nation Security Council will convene to negotiate the cross-border mechanism as the UN mandate for delivering aid into NW Syria through Bab Al Hawa crossing point expires on July 10th. It has become even clearer how Russia is manipulating the cross-border mechanism as it keeps using humanitarian aid as a bargaining chip to gain concessions in its attempts to politically float the Assad regime.

The humanitarian and life-saving aid being subject to Russian blackmail cannot be accepted, nor the weaponization of aid by Russia and the regime can be accepted. Russia and the Assad regime politicizes aid distribution in its areas of control, and siphons aid to finance its terrorist operations to kill Syrians, while civilians are deprived of the aid. The Assad regime can not be entrusted with more control over humanitarian aid, especially in light of the long history of Assad regime's weaponization of aid to besiege and starve Syrians.

The Syrian humanitarian crisis the civilians are experiencing in Syria is the outcome of the absence of a political solution, the abandonment of the Security Council Resolution 2254, and the misleading political tracks that have led to political stalemate preventing the Syrian people from achieving their demands for change, accountability, justice, redressing victims and their families, and putting an end to the systematic violations of the Assad regime.

For The White Helmets, curtailing the demands of Syrians and restricting them to the continued entry of aid across the border is a reduction of the Syrian issue to a mere humanitarian issue. It is a betrayal to the Syrians and their sacrifices. Furthermore, accepting to deal with the Assad regime to deliver aid from its controlled areas is an insult to the victims and their families, and an attempt to politically float the Assad regime which has murdered and displaced Syrians civilians and destroyed entire cities. The White Helmets urges the countries that support the Syrians' right to a change to reactivate the political process in accordance with Security Council Resolution 2254 to end the 11-year-long Syrian crisis, and ensures that criminals do not resume power by the help of the international community.

The White Helmets Refuse the Reduction of the Syria Crisis to an Annual Debate on Cross-Border Aid and Demand an Independent Mechanism to Deliver Aid Download 5.3 MB